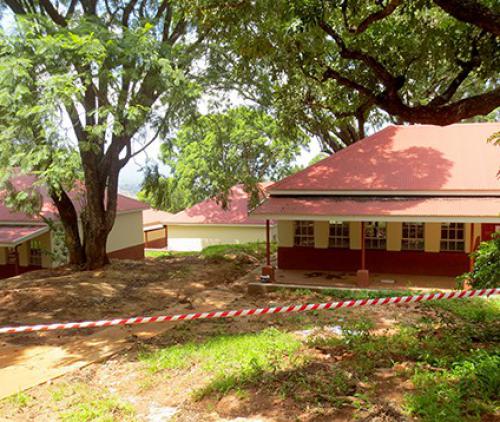 Some of the buildings under renovation at Lemana College. Photo: Bernard Chiguvare.

'We don't want a school, we want a TVET College'

In May this year, Limpopo Mirror reported on the Limpopo Department of Basic Education’s announcement about finally restoring Lemana Community College back to a high school, after the project had been mired in controversy and disruptions, with costs running into tens of millions of rands.

The Waterval Community Development Forum (WCDF) and the Lemana Task Team, however, claim that this is the first word they have heard about this project and do not support the restoration at all.

“When renovations started at Lemana College, we as a community were not consulted,” said Mr Salaza Khosa, chairperson of the WCDF. “The Department of Public Works dealt with the school governing board; we only learnt later about their plans to move the high school to Lemana College.”

Khosa said that, if the community had been consulted, they would have pointed out to the Department of Education that no need existed for another high school, many high schools can be found in the area. The WCDF believes that a greater need exists for a college in Vhembe West, as students from this area have to travel far to extend their education.

The WCDF produced documents written to the Head of Department (HOD) of Public Works to request the HOD to meet the WCDF in respect of the renovations of Lemana Community College. They also request that the department send a contractor to resume renovations at Lemana.

“In other words, nothing was said about converting the college into a high school,” said Khosa. The WCDF argues that restoring Lemana College will benefit the community and the business sector.

The Department of Basic Education was surprised when hearing that the WCDF was opposed to the project. In the 2020/2021 Vhembe District Municipality’s IDP and budget public participation document, the project is listed as “Restoration of Lemana College to High School”, scheduled to resume on 28 September 2021 and to be completed by 28 March 2023.

“A meeting, convened by the Department of Public Works, was held on 17 May 2021 at the Njhakanjhaka Tribal Authority,” said Mr Tidimalo Cheune, provincial spokesperson for the department. “Although the Head of Department of Education could not attend due to other commitments, the WCDF was present at this meeting.”

According to Cheune, Mr Seutloali Makhetha from Vhembe West, representing the department, attended the meeting. Lemana High School’s governing board, as well as the school management team, were also present.

He further pointed out that, although the WCDF claimed not to have been aware of the project, they were in possession of a letter from the Department of Public Works, Roads and Infrastructure, with the subject reading: “Restoration of Lemana College site into Lemana Secondary, dated 13 December 2017”.