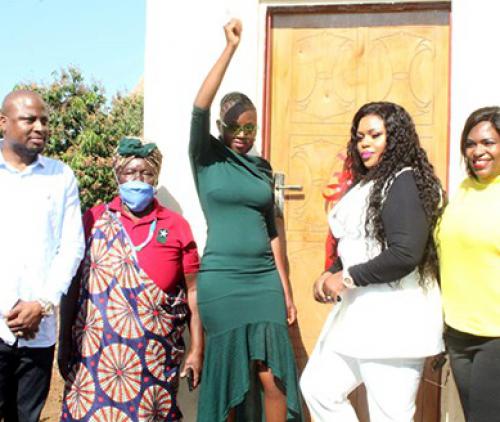 “Oh, God is good, and He has always been good to me,” exclaimed a very happy Ms Constantia Chauke when she received the keys to her modest new one-room house from Midey Trading on Saturday, 12 June.

She is one of the lucky survivors of the devastating Cyclone Eloise that hit Mozambique in January this year and wreaked havoc in parts of Limpopo, leaving a trail of destruction and death in its aftermath.

Chauke (21) lives in Makhasa village outside Malamulele with her husband and two children. She still remembers vividly what happened. “I was sleeping in a mud rondavel with my two kids on that fateful night. It was raining heavily and there was a very strong wind when the mud brick wall collapsed a few inches from me and my two kids,” she said. “I can say I witnessed the power of God then. He saved me from certain death, but after the incident we had no place to stay. We had to squeeze ourselves in with family members in another mud rondavel.”

Life had been very difficult for them since then. She said that it had been very humiliating to share a hut with other people. “There was no privacy at all, and I prayed that one day our situation would change for the better. Many who fell victim to the cyclone did not live to tell the tale, but I survived. And then God blessed us with a new house. I could not believe it,” she said.

Midey Trading’s owners, Mrs Fhulufhelo (CEO) and Mr Ayodele Odunayo Ogunrinde (director), were accompanied by staff and fellow businesswoman and friend Ms Konanani Makhuvha, who donated groceries and blankets to the family. Locals came in their numbers to celebrate the handover with them on Saturday.

Fhulufhelo said she was very touched when she heard of Chauke’s plight. “It was our privilege to assist someone in need. This is not only my company’s way of giving back to the community, but it also forms part of my birthday celebration this year, as I turn 40 on 22 June. I have been helping disadvantaged people, instead of asking for presents. Giving should come from the heart,” she said.