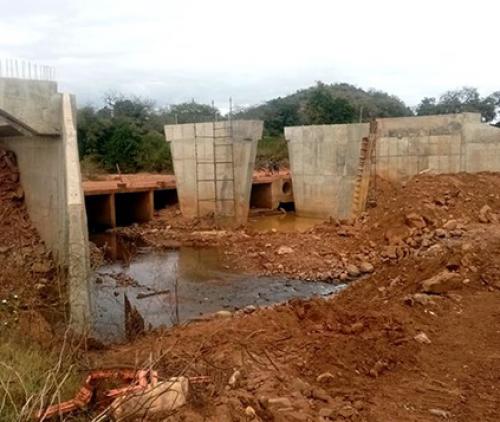 The R26 million Ha-Lambani bridge is still to be completed after two years. Photo supplied.

Ha-Lambani bridge may soon be completed, but at extra cost

Construction on the new Ha-Lambani bridge, which was supposed to have been finished in April 2020, is not even halfway complete. The municipality is quick to blame the slow progress of the construction on Covid-19 and the lockdown, but the community liaison officer (CLO) of the project said that work had only been interrupted once because of the pandemic. A shortage of material and labourers seems to be the main problem.

When the 3 450 residents of Ha-Lambani village, located about 53 kilometres outside Thohoyandou, heard that the Thulamela Municipality was going to build them a new bridge, they were ecstatic, knowing that the limited access they had to shops and services when it rained heavily would finally be a thing of the past.

Construction commenced fervently in June 2019, as promised, and the R17 million-project seemed to be progressing well. However, two years later and the bridge is not even halfway complete, leaving the community to wonder whether they will see their ‘new bridge’ in this century, or the next.

They were also scratching their heads in more confusion when Thulamela’s mayor, Cllr Mushoni Tshifhango, delivered his State of the Municipality Address on Phalaphala FM radio on Friday, 18 June, making some surprising announcements.

“We will embark on a programme to develop some of the access roads and bridges within Thulamela in this financial year. Ha-Lambani Bridge has a budget of R2 million, aimed for this coming financial year. However, the overall budget is at R26 256 318.71,” Tshifhango said in his speech.

The chairperson of the steering committee, Mr Steven Munyamela, said that, to the community’s knowledge, the budget allocated for the Ha-Lambani Bridge was R17 million. “In our books here, only R17 million was budgeted for the bridge. Even when they came to us, they told us the budget was R17 million,” he said. Apparently, no one knows anything about “access roads” or other bridges to be developed.

Munyamela said that, whenever they asked questions on behalf of the community, they were told to “shut up” and “stop giving orders” because they were not qualified civil contractors. “When one of the community members tried to speak out about the state of the bridge on Facebook, Thulamela Municipality was quick to respond, labelling the person’s post as ‘fake news’.”

Thulamela Municipality responded with the following via their Facebook page:

“Thulamela Municipality wishes to acknowledge and make necessary correction on the Facebook post, dated the 19th of June 2021.

We wish to re-iterate and assure community members that the contractor is on-site, the project is not abandoned and will be completed as planned and within the R26 million budget, as tabled by the mayor during his budget speech address.”

Thulamela Municipal spokesperson Mr Nndwayamato Tshila said that the construction of the bridge was almost done and would be handed to the public in August this year.

“The constructor is on-site as we speak. We are only left with a deck slab, outlet wing-wall and to join the approach road,” he answered in response to a media enquiry.

Tshila also assured community members that their money was safe. “We didn’t give the constructors the full R26 million.”

With regard to the slow progress made on the construction of the bridge, he said that the national lockdown had played a big part in delays and disruptions.

But the CLO of the project, Ms Mbavhalelo Ramatamba, said they only had to stop work due to the pandemic on one occasion, and that had been during the total lockdown in March last year (2020).

According to Ramatamba, the project has been stopped at present because they are waiting for pre-casting bins. “We were told that the pre-casting bins would be here before April this year, but they still have not arrived.”

She further admitted that the shortage of labourers was undoubtedly one of the main reasons why the construction process was taking so long. “Only ten people were hired for this project, and we are working on two bridges. Sometimes we have to divide this team into two groups – meaning five people per bridge – which delays the process.”