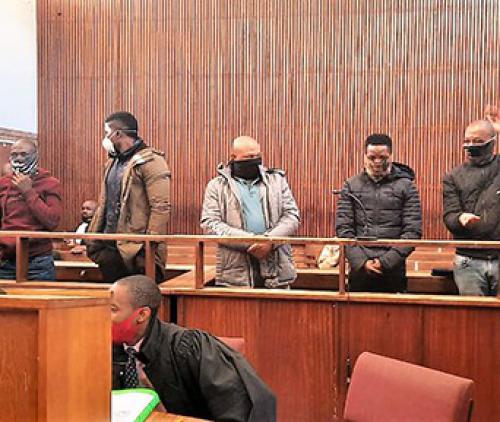 The seven former Beitbridge Border Post soldiers in die dock during their court appearance in the Musina Magistrate's Court on Wednesday. They were remanded in custody until 28 June when the court will hear their bail applications. Photo: NPA Limpopo.

Bad week for SANDF as nine border soldiers are arrested

Just whom can you trust when the very people entrusted to uphold the law turn out to be criminals? This is exactly the question asked by many, following the news of the arrest of several members of the South African National Defence Force (SANDF) stationed along the country’s northern border with Zimbabwe on suspicion of involving themselves in criminal activities the past week.

On Friday, 18 June, police arrested two members of the SANDF together with an undocumented Zimbabwean man for allegedly transporting illegal cigarettes in an official army vehicle. The soldiers were in uniform while the civilian was wearing an army jacket. “The police at Beitbridge received information about an army vehicle which was loaded with illicit cigarettes which were to be delivered to an unidentified buyer around Musina. They then reacted by staging a stop-and-search operation next to the Baobab Truck Park along the N1 road north of Musina. The civilian was immediately arrested but the armed soldiers reportedly became confrontational and refused to be arrested. The police then confiscated the said vehicle,” said provincial police spokesperson Brigadier Motlafela Mojapelo in a press statement after the incident. When police searched the vehicle, they found 12 boxes of illegal cigarettes concealed at the back of the army Toyota Land Cruiser, with a street value of about R160 000.

According to Mojapelo, the two soldiers were later brought to the police station by their commander and were then detained. All three the arrested men appeared in the Musina Magistrate’s Court on Monday. The soldiers appeared on charges of possession of illegal cigarettes, defeating the ends of justice and corruption. They were remanded in custody until bail application on 24 June. The Zimbabwean man appeared in a separate court. He was also remanded in custody until his next court appearance on 29 June. At the time of our going to press, his name had not yet been released.

Upon enquiry, Brig Gen Mafi Mgobozi from the Department of Defence Communication Office confirmed the arrest of the soldiers. “The SANDF confirms that the two members who were arrested on Friday, 18 June, by the Limpopo police for an alleged transportation of illegal cigarettes on the N1 between Beitbridge and Musina are attached to 1 Special Service Battalion in Bloemfontein. The rank and names of the two soldiers are Lieutenant Lucky Jabu Mokoena (38 years) and Private Sphamandla David Zungu (27 years). The members were deployed in Limpopo,” Mgobozi told the Zoutpansberger. Apart from the official police investigation into the matter, Mgobozi added that the SANDF would also be conducting their own investigation into the matter while also cooperating with the police investigation.

The SANDF’s woes, however, did not end there. Late Tuesday afternoon, the Directorate for Priority Crime Investigation (better known as the Hawks) confirmed the arrest of six more SANDF members previously stationed at the Beitbridge Border Post on allegations of corruption on Monday. They were arrested in the North West, Northern Cape and the Free State.  “The suspects were deployed at the Beitbridge Border Post to defend and protect the territorial integrity of the Republic of South Africa between 2017 and 2019. Instead of carrying out their constitutional mandate of ensuring national security at the borders, they allegedly connived with vehicle-smuggling syndicates to smuggle stolen vehicles through the Limpopo River in exchange for money,” said the Hawks’ provincial spokesperson, Captain Matimba Maluleke, in a press release. According to Maluleke, the arrested SANDF members would allegedly demand R15 000 per vehicle, which would be shared among themselves.

The six arrested soldiers, whose ranks range between Lance-corporal and Private, appeared in the Musina Magistrate’s Court on Wednesday. A seventh accused, who handed himself over to the authorities later, appeared with them. Five of the accused hold the rank of Private. They are Edward Lepokolo (48) from Sebokeng, Rapula Reuben Maidi (49) from Ikageng, Bulelani Danti (30) from King Williams Town, Peter Thato Nemane (52) from Soshanguve and Thembani Mjelo (31) from East London. Two accused hold the rank of Lance-corporals. They are Marks Funeka (49) from Carletonville and Ludwe Gwedashe (44) from Port Elizabeth. All seven, who face charges relating to smuggling stolen vehicles into Zimbabwe, were remanded in custody until Monday, 28 June, for a formal bail application.

In the meantime, the national Head of the Directorate for Priority Crime Investigation, Lieutenant General Godfrey Lebeya, hailed the collaborative efforts by the integrated team to vigorously fight and root out corruption in the public and private sectors. “We certainly hope that our joint team efforts will inspire confidence in the entire civil servant and the South African community at large. Those who are entrusted with responsibility to protect and serve must never be tempted by dirty money from organised criminal groups, otherwise the lessons will be learnt the hard way,” said Lebeya.