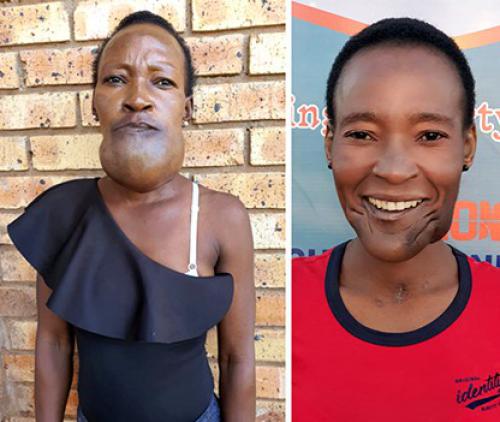 Left:Meida Ramuhala endured excruciating pain and discomfort for more than 20 years because of a tumour that grew on her chin. Right: Meida expressed her happiness during an interview with Limpopo Mirror on Sunday, after the tumour was successfully removed.

After 20 years of struggling with tumour, Meida can smile again

When Limpopo Mirror interviewed Meida Ramuhala – the lady with the overgrown tumour on her chin – in November last year, she was discouraged and desperate after years of living in extreme discomfort. But when we visited her again on Sunday (13 June), she was smiling from ear to ear. And with reason, for the tumour had been successfully removed.

Ramuhala’s life changed drastically when she developed a tumour on her chin in 1999, a condition that was later medically explained as mandibular ameloblastoma. In the previous interview with Limpopo Mirror, she told how the tumour had turned her life upside down. She explained how she was struggling to find employment, because the tumour had become so big that nobody wanted to employ her.

“Just imagine having a tumour that caused you constant pain for over 20 years and you couldn’t find any employment because of it. The next thing was to try and get a doctor to recommend a social grant, so that you could subsist on it,” she said.

She had had many X-ray scans since 1999, but the doctors were unable to see what was inside the tumour. She remembers very well that she was at home when she first felt her chin itching. “I scratched it and it started to swell out of proportion,” she said. “I had to quit school because the pain was excruciating, to the extent that I could not focus. When the pain started, I could hardly sleep. I had given up all hope.”

However, her hope was fully restored when the Alfred Mafukaduvha Foundation brought her plight to the office of the Limpopo Department of Health’s MEC, Dr Phophi Ramathuba.

After the operation, Ramathuba visited Ramuhala at the hospital and was very happy that the surgery had been successful. “I want to take this opportunity to thank the – mainly female - team, led by Dr Itani Mulugo Dikgale, who have performed this life-changing procedure on Ramuhala,” she said.

Mr Alfred Mafukaduvha said that he was glad that Ramuhala was relieved of the pain and discomfort caused by the tumour. “The foundation is grateful for the unique leadership of our honourable MEC, Dr Phophi Ramathuba, for her quick intervention when we approached her about Ramuhala’s condition,” he said. “We further want to extend our appreciation and gratitude to Dr Dikgale and her team, who performed the surgery.”

Ramuhala expressed her excitement and joy. “I had already lost all hope,” she said. “Then I found a doctor who was willing to operate on me and remove the tumour.”

Mafukaduvha further pointed out that Ramuhala had been unemployed for more than 20 years because of the tumour and was without a house of her own. “She couldn’t save and build a house for herself and her 13-year-old daughter, since she was solely relying on her daughter’s social grant for subsistence,” he said. “So, we are pleading again with Good Samaritans who might be willing to contribute towards building her a house to get in touch.”

The Alfred Mafukaduvha Foundation can be contacted on Tel 072 551 5666 or email them at alfmafukas111@gmail.com.