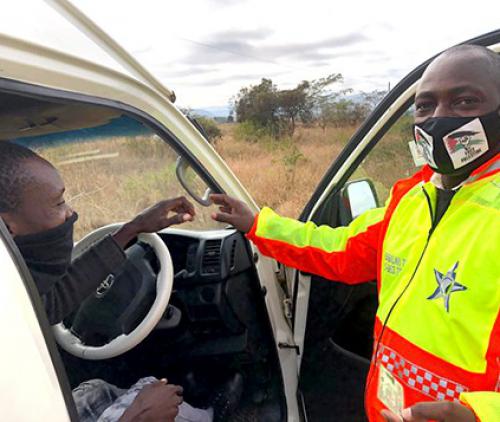 The political game playing is continuing in the Thulamela Municipality, with the mayor apparently denying that he has any knowledge of the instruction that the council should suspend him because of his involvement in the VBS Mutual Bank fiasco.

Two weeks ago, both the mayor, Avhashoni Tshifhango, and the municipal manager, Hlengani Maluleke, had reportedly been served with precautionary suspension notices for approving the illegal investment of public money with VBS Bank. They were given seven days to respond to letters requiring them to explain why they should not be suspended.

The ANC’s regional spokesperson, Tshifhiwa Dali, was quoted as saying that the municipality had been instructed to act in a consistent manner and in line with the recommendations of the forensic report (about the VBS issue). Dali said that the issue had been referred to the provincial executive committee of the ANC for further processing.

Last week, Cllr Tshifhango was present during a joint operation between traffic officers and members of the SA Police at Makhithani in Mutale. A beaming Tshifhango then said that he had never been suspended and was still not suspended.

“I am still mayor of Thulamela Local Municipality. I am not suspended, and I was never suspended as you can see me working here. I am going to work every day as I have been mandated by the ANC, and I will continue taking service delivery to the people,” said Tshifhango. He denied being told anything new about his position. Even the council, he said, had never taken a different decision about his position.

Tshifhango believes that the stories about his suspension are politically motivated. “As we are going to regional conferences, such things can happen,” said Tshifhango.

The ANC spokesperson in the Vhembe region, Tshifhiwa Dali, commented that he had never confirmed the suspension of Tshifhango. “What I said was that the REC (regional executive council) took a decision to suspend the mayor and the matter has been referred to the PEC (provincial executive council) to finalise it.”

The recommendation to suspend Tshifhango and Maluleke was taken in line with recommendations made in a forensic audit report. The report found that the municipality had illegally invested R30 million at VBS and received interest of just over R682 000. The report indicated that political pressure was exerted on officials to invest with VBS. Unlike many of the other municipalities, Thulamela did not lose money.

The municipality’s spokesperson, Nndwamato Tshiila, confirmed this week that Tshifhango and Maluleke were still at work.

Opposition parties slammed the apparent political games that are playing out at the Thulamela Municipality. The EFF’s Cllr Titus Tshikalange said that the ANC must provide clarity on the matter. He mentioned that the conduct of Tshifhango was strange, because he had excused himself when the minutes of the previous meeting had been discussed.

The Democratic Alliance’s representative, Cllr Thelma Marole, said that they were surprised to see the mayor attending a council meeting last Friday (11th). She confirmed that the mayor was still in his office and working as usual. On Tuesday (15th), a council meeting took place and, according to Marole, Tshifhango had once again excused himself when the minutes of the previous meeting had been read.

Marole said that Municipal Manager Maluleke had responded and supplied reasons why he should not be suspended.