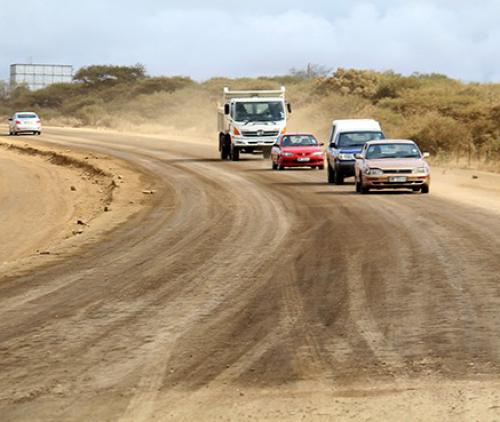 Motorists used the unfinished D959 Road after workers downed tools, claiming that they had not received their salaries. Photo: Kaizer Nengovhela.

The sighs of relief over the long-awaited rehabilitation of the D959- and D3715 roads, which eventually started earlier this year, might have been a little premature, as delayed payment of workers’ salaries and a shortage of material appear to be interfering with progress on the projects.

These two roads have been in dangerously poor condition for a long time. The potholes on the D959 Road from Louis Trichardt past Madombidzha to the Makhado Air Force Base and the D3715 Road from Madabani to Tshikhodo have endangered the lives of motorists as well as pedestrians. Numerous fatal accidents and loud outcries from the local communities over the past few years were needed before the Department of Public Works finally realized that they had to do something about the matter, and soon.

Everyone was overjoyed when the MEC for the department, Mr Dickson Masemola, visited the area in December last year and announced that the two roads were high on the agenda and that they had put R11.5 million aside for the rehabilitation thereof.

Masakane GVC Construction was appointed to run this project and work finally commenced in February this year. The project is supposed to be completed by July (this year), but by the look of things, this goal is not likely to be met.

Construction workers downed tools on Monday (7 June) and refused to lift another finger before they were paid their outstanding salaries. The workers went on strike and opened the new constructed road forcefully to allow motorists to use it, despite the fact that the work is incomplete.

One of the employees, who wishes to remain anonymous, claims that they have not received their salaries for May. “It was a bitter pill to swallow when I discovered that I had not been paid. I checked with my colleagues, only to realise that none of them had been paid either,” he said. Some of the workers apparently only received half of their wages for the month.

“We want our full salaries (for May) and outstanding salaries for February too, as per agreement. When we call the contractor, our calls go unanswered. When we phoned the on-site manager, he told us that he wasn’t paid either, so he doesn’t have money to come to site.” He said his family thought that he might have been paid and misused the money.

On enquiry, the on-site manager, Mr Nyiko Chauke, said that he had paid the workers on Monday (31 May), but because the workers were not using the same bank as the company, their salaries did not show in their bank accounts immediately. He denied that he had not paid everyone’s full wages, or that he still owed any of them outstanding wages since February.

When Limpopo Mirror asked him about the delay in work on the road for almost two months, he said that he was still waiting for the department’s engineers to inspect the road and give them the go-ahead.

The chairperson of the Zoutpansberg Community Development Forum (ZCDF), Mr Patrick Sikhutshi, said that the slow pace of the construction of the roads left the Zoutpansberg community perplexed. He accused the contractor of not working according to a plan or schedule and seemed to be working only for a few days at a time and then abandoning construction the rest of the time with no one on site. He said that ZCDF had contacted the department and the municipality, but both appeared to be helpless and showed no interest. Some councillors jumped in and appointed labourers, but then seemed to lose interest again.

Sikhutshi further said that the ZCDF had learnt informally that Cllr John Mamafha was the chairperson of the Public Service Commission (PSC) and that neither Makhado’s mayor, Cllr Samuel Munyai, nor Mamafha appeared to be on top of the process for this project.

“Everything is standing still, and nobody informs the community of what is happening. We have been liaising with the Department of Public Works, Roads, and Infrastructure. It does not appear like the head of department knows what he is doing,” Sikhutshi said.

According to him, the vehicles of motorists who use these roads are damaged and the situation could not be allowed to go on like that any longer. “We want to see the completion of this phase on the D959 Road, and continuation on rehabilitation of the R3715 Road. We give them two days to sort out this mess. We shall consult with the community again in a few days’ time to decide on the next course of action.”