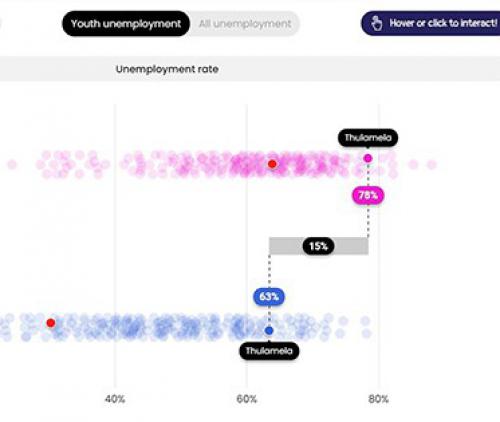 The unemployment rate for the youth in Thulamela is sitting at more than 70%, with young women the worst hit.

The rate of unemployment in the country has reached new record highs, but in Limpopo, and especially the Vhembe region, the number of people who are not employed is terrifying. Officially, the figure indicates that almost half of the productive population are without jobs, but the figure for young people is even more devastating.

Stats SA released its Quarterly Labour Force Survey (QLFS) on 1 June, which indicates that the year-on-year decline in employment in Limpopo was 10%, or 139 000 jobs. In the last quarter (January to March this year), the province lost 33 000 jobs.

The biggest losses, in terms of volume, were suffered in Limpopo’s trade industry, where 61 000 people lost their jobs. The construction sector shed 46 000 jobs and in private households 30 000 workers lost their jobs the past year. In the manufacturing sector, 27 000 jobs were lost. The agricultural sector, however, provided a glimmer of hope, creating 10 000 more jobs compared to the fourth quarter in 2020. The mining sector (2,3% increase), transport sector (22% up) and community and social services sector (3,1% up) assisted to improve the overall picture.

Stats SA’s QLFS unfortunately does not give a breakdown that would indicate the current situation in the various regions. To try and get a better picture, one has to analyse the latest available census data. The last census was done in 2011, but whether the situation had improved is doubtful.

A non-governmental organisation, OpenUp, recently launched a new website with data visualisations based on the census figures. OpenUp describes itself as an organisation partnering with government, organisations, industry leaders and civil society “to identify, gather and make accessible information that supports open communities and an empowered citizenry”.

The data visualisations make comparisons between municipalities across the country and seeing what the level of unemployment is relatively easy. It incorporates useful factors such as gender and level of education.

The situation at the Thulamela Municipality is especially disconcerting. Here youth unemployment (ages 15 to 24) sits at more than 70%. The worst-hit sector is young women, where the unemployment rate is 78%. Among young men, the rate is 63%. The percentage for all age groups is 43,5% unemployment. This is also the official rate of unemployment and not the expanded rate, which would be much higher.

What is even more worrying, is that in the Thulamela Municipality, the percentage of women aged between 20 and 24 with at least matric stood at 47%, compared to the 40% of their male counterparts. Seemingly, even though men are not as qualified as women, they still have a better chance of finding employment.

Makhado Municipality did not fare much better, with a youth-unemployment rate of 64%. Among women the unemployment rate was 72% and among young men 56%. The official rate of unemployment in this municipality stood at 37%. As is the case in Thulamela, women in the age group 20 to 24 have a higher rate of education than men (37% vs 30% who have matric or more).

Musina, surprisingly, had a much lower rate of unemployment in 2011. Among young females the figure was 42% and among males 24%. The split between young men and women as far as educational levels are concerned, was level, with 26% having matric or a higher qualification.

The data visualisations can be found at: https://openup.webflow.io/blog/age-gender-and-unemployment-in-south-africa.