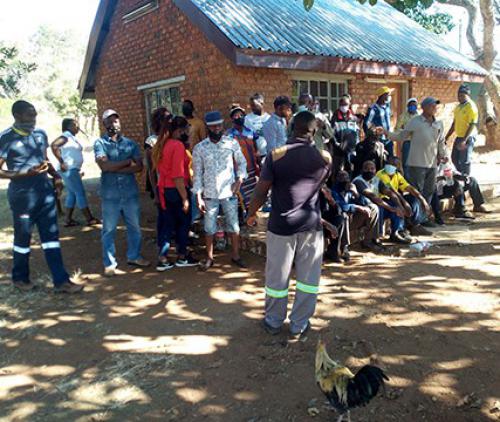 Beneficiaries gather at one of the houses they claim was not renovated properly.

In the latest incident of infighting among members of a communal property association (CPA), members of the Tshathogwe CPA are at each other’s throats. Accusations of the misuse of funds are levelled against the current committee, who in turn approached the court to interdict members who act in an illegal manner.

The Tshathogwe group succeeded with a land claim in 2008, and roughly 3 000 hectares of land were returned to the people who were forcibly removed from the farm Bankop in 1985. Some relocated to Madombidzha, while others moved to Vleifontein and Maila village.

The CPA intended to implement economic-development and job-creation projects to empower its beneficiaries through ecotourism, game farming, agriculture, natural resources management, nature conservation and environmental management. Some families also indicated they would want to return to the farm to live there.

Conflict surfaced among the CPA members soon thereafter and in 2012, the High Court was asked to intervene. An interdict was obtained in February 2013 in an effort to restrict some of the illegal activities of members.

Willie Hadzhi Ntshengedzeni, the current chairman of the CPA, explained to Limpopo Mirror how the conflict had started. “We noted that Joshua Nthabalala, one of the beneficiaries, was demarcating sites on part of the land,” he said. Nthabalala was allegedly making part of the land available without the consent of the CPA. “We stopped him from the activity, and it is when the infighting started,” said Ntshengedzeni. The CPA also questioned where the money went to that was paid by the people who wanted sites.

In February this year, the conflict flared up again when a splinter group apparently started clearing bushes on the farm, stating that they were about to start demarcating sites. Part of the fence was cut to allow a TLB to enter the area and assist with the clearing.

The Bandelierkop SAPS was asked to intervene, and a charge of trespassing was laid. The police, however, were reluctant to get involved and presumably viewed the matter as a civil dispute. In March, the activities continued, and members of the splinter group started measuring out sites to be demarcated. The CPA then turned to the court to get an interdict to force the police to act against members of the splinter group.

The interdict was granted on 8 April and the parties had to be back in court on 10 May to supply reasons as to why it should not be made a permanent order.

Mr Thoba Solomon, spokesperson for the section of the beneficiaries who call themselves the Concerned Group, said that they had complied with the terms of the interdict issued on 8 April and were now awaiting the outcome of the case. “The court told us we will be informed of the results after 14 days, but the days are over, and we have not heard any word from the court. We cannot wait any longer while our land and our projects are suffering,” said Solomon.

The past Saturday (30 May), a group comprising 30 members from the Concerned Group had a meeting at the Bankop farm. According to Solomon, the meeting was called to discuss the way forward. Solomon said that they were very concerned about what was happening within the CPA and the manner in which the projects were collapsing.

As an example, Solomon referred to the cattle project and claimed that the animals were being abused, because sufficient water sources had not been provided. He pointed to an empty 5 000 litre water tank, which meant the cattle had to walk roughly 10 kilometres to the next source of water.

The Concerned Group are also complaining about renovations done to houses on the property. They argue that in 2019, R3,9 million was supposedly spent on renovating the houses, but they doubt whether this was done. “We wonder how the millions of rands were used. We are calling for an audit of this money,” said Solomon. He said that from what they could observe, only the roofs had been renovated, which could not have cost that much.

One of the central disputes seems to concern the term of office of the current CPA committee. The current committee comprises Willie Hadzhi Ntshengedzeni (the chairman) and Chief Livhuwani Matsila, who was appointed as the project advisor. The Concerned Group claim that the committee’s term of office expired in March 2019. The committee members were elected in 2016 and they were expected to serve for only three years.

Ntshengedzeni did not dispute the fact that the committee’s term of office had expired, but said that the Department of Land and Rural Development had extended their term office due to the Covid-19 pandemic.

The other allegations were vehemently denied by Ntshengedzeni. He said that no serious water shortages existed on the farm and the cattle could always go to parts of the farm where water was available at three water-pumping stations.

Ntshengedzeni said that allegations of the misuse of funds were unfounded, and they had nothing to hide. He said that the CPA’s accounts were audited and if anyone had a problem, they could access the audited statements.

Solomon, in turn, said that they intended writing to the Land Commission, calling for elections to be held on 12 or 19 June this year. He also said that the Concerned Group would go ahead with the plans to have one hectare of land allocated to each family to cater for unemployed beneficiaries.

Ntshengedzeni said the current committee members had no problem holding elections as long as the Department of Land and Rural Development approved of the process and it was conducted within the parameters of the legal framework. He said elections could be held by the end of this month.