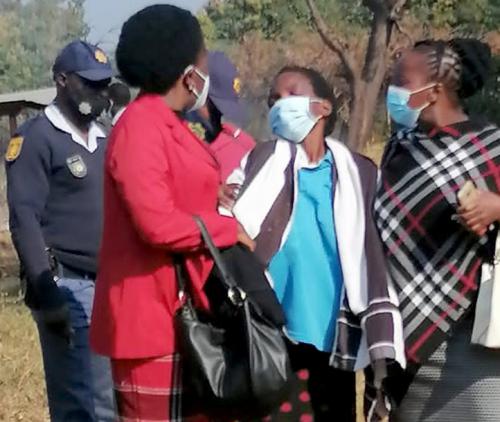 The suspect, Ndishavhani Mutavhatsindi (middle), tried to say a few last words to her relatives before the police escorted her to the cell. Photo supplied.

A 42-year-old woman from Ha-Lambani Tswinganani was arrested after allegedly beating her 11-month-old baby to death on Sunday. She appeared in court on Tuesday (1st), but remains in custody.

Ndishavhani Mutavhatsindi (42), the mother of three children, allegedly assaulted the baby at home at Ha Lambani village on Sunday. According to the spokesperson for the police in Limpopo, Brig Motlafela Mojapelo, the woman reportedly locked herself and the infant inside a hut, after which she started beating the child. Residents came to the boy’s rescue, but were too late to prevent his death, said Mojapelo.

“Residents reportedly heard the frantic cries of the baby and rushed to the house. After realising that the door was locked, they then broke it down, opened it and rescued the badly injured baby from the mother,” he said. The baby was rushed to the local Lambani clinic, but was declared dead on arrival.

The incident caused a lot of anger among members of the local community, some of whom threatened to take the law into their own hands. Limpopo police commissioner Lieutenant General Thembi Hadebe urged residents to desist from taking the law into their own hands, but rather to allow it to take its course. “Residents must instead give the police space to legally deal with this gruesome incident,” said Hadebe.

The spokesperson for the Department of Social Development, Witness Tiva, said that the department was saddened by the death of this 11-month-old baby. “What worries the MEC, Nkakareng Rakgoale, most is that this incident happened at a time when we are supposed to be showing love and appreciation to the children we are having,” she said.

“The MEC has urged parents who are having problems with their children or in their relationships not to resort to violence but to approach our social workers who are professionals for intervention,” she added.

The infant’s mother was arrested on a charge of murder and investigations are under way. The case was postponed to 29 June for further investigations and to get the woman’s mental history from her family.