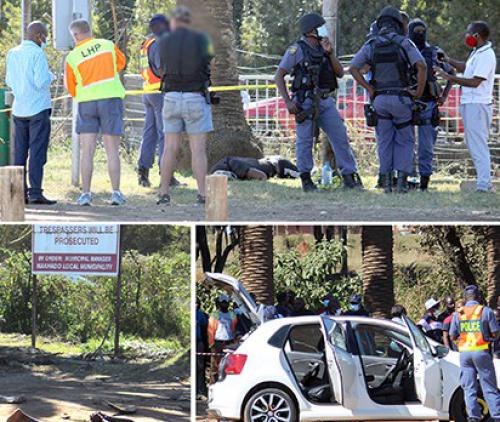 Above: Police members stand next to the man, alleged to be a highly sought-after criminal, whom they shot dead in Louis Trichardt on Sunday morning. Left: The three men who were arrested after the alleged suspect was shot dead by the police. Right: The bullet-riddled vehicle in which the alleged suspect and three other men were traveling. Photo's: Kaizer Nengovhela.

The Limpopo police refused to respond to enquiries this week about the fatal police shooting on Sunday morning that left one man dead in Louis Trichardt.

The man was shot dead and three others were arrested, following a shootout between the suspects and the Makhado police at the corner of Rissik and Klein Street near Bridge Auto. In the absence of an official police statement, the shootout is said to have taken place around 11:00 when the police apparently confronted a highly sought-after suspect. The situation quickly escalated, however, and a shootout ensued during which the suspect was killed. The three men who were accompanying the suspect were arrested at the scene. Shortly after the incident, rumours started circulating on social media that the suspect shot dead could be linked to a spate of violent crimes in the Musina area.

Since the fatal shooting, this newspaper has tried in vain to elicit a response from provincial police spokesperson Brigadier Motlafela Mojapelo regarding the incident. The only response the newspaper received came in the form of a WhatsApp message from Mojapelo around 19:00 on Tuesday, merely stating: “The case has been handed over to the IPID.”

The newspaper has since escalated its enquiry to the national office of the IPID. The office’s spokesperson, Ms Ndileka Cola, responded on Wednesday by stating that she was still waiting for confirmation of the incident.

At the time of our going to press, the circumstances surrounding the event and the name and age of the deceased remain unknown. What had happened to the other three men arrested on the scene could not be determined either.

* Cola responded on 3 June by confirming that IPID is investigating the circumstances surrounding the death of the man allegedly at the hands of a police officer. “Yesterday, 2 June, a post-mortem was conducted and IPID attended as part of the normal investigation process,” she said. Cola added that they will release more details about the incident as it becomes available.