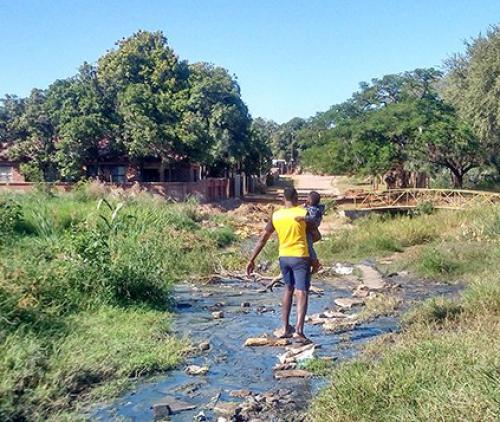 Limpopo Mirror caught up with Kenny Chimoyo struggling to cross the stream of sewage to get to his house. The path is also used by Musina High School pupils from this area. Photo: Bernard Chiguvare.

“It seems the Vhembe District Municipality (VDM) has forgotten that there are actually people inhabiting this place. We don’t enjoy living here anymore,” said Mr Kenny Chimoyo, a resident of Nancefield who lives next to Musina’s old graveyard.

Chimoyo’s house is among 32 houses affected by the blocked main hole of the sewer next to Musina High School. He said that this was not the first time they had experienced the problem. However, the municipality has never taken this long (two months now) to send someone out to fix the blockage.

According to Chimoyo, the houses were built long ago on a swampy area. In 2018, Musina Municipality offered to relocate some of the families (those who lived in four-room houses) to RDP houses built in Mushongo, a location next to Nancefield. However, some of these families refused the offer to be relocated, as the RDP houses were smaller and had fewer rooms than the houses at Nancefield.

“I was among those who were not offered an RDP house. I occupy a nine-room house. They told us that they had no budget for nine-room houses. Now we are still here, and it seems that no one takes care of us,” said Chimoyo.

According to him, they had called the VDM several times to bring the situation to their attention, but all they received were promises or excuses, while the sewage problem posed a health hazard to the people living there. “Children play in the sewage and get sick. My child had a runny stomach a few weeks ago and I had to take him to hospital,” he said.

Limpopo Mirror reported on the relocation issue in February this year (6 February 2021), at which time the municipality indicated that it needed to sit around a table with the affected families to discuss these issues. According to Mr Wilson Dzebu, spokesperson for Musina Municipality, the resolution is still pending.

Grace Ndou, who has been living in one of the houses for three years now, said the situation there was really bad as they had resorted to the bucket-system and threw the faeces in a nearby drain only a couple of metres from their houses. “Sometimes I have to walk a kilometre to my friends, just to use their toilet. At night I have no choice but to use the bucket,” said Ndou.

When Limpopo Mirror visited the area on Saturday (15 May) most of the houses’ windows were closed. Only a few children were playing outside in a dusty road, under supervision of their parents. “I will not allow my grandchildren to play outside. They must rather watch TV inside, or I take them to a park for the day and come back later,” said a 55-year-old granny, who preferred to remain anonymous. She is a migrant worker from Zimbabwe and said she used to love it there because the crime rate is so low.

The VDM still had not responded to a media enquiry at the time of our going to press, even though several requests had been sent to them.