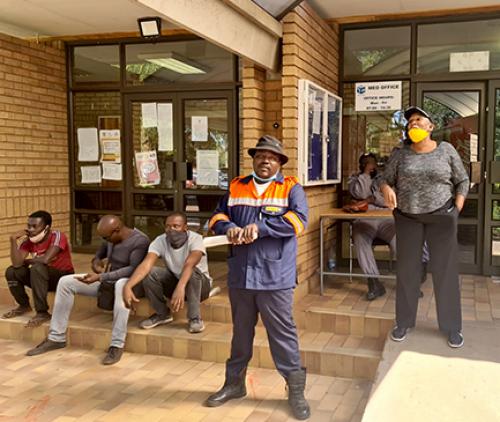 Musina residents continue to lose more faith in their municipality as their pleas for better service delivery seemingly fall on deaf ears.

In protest, around 30 residents barred the entrance to Musina’s municipal offices on 21 May while they vented their dissatisfaction. The protesters would not allow any services to be performed at the municipality and no-one, except municipal workers, was allowed to enter the building.

Ms Mmanare Semenya, a local community leader, spoke to Limpopo Mirror during the protest action. “We will close the entrance until our concerns are addressed. There are several concerns regarding service delivery that we have been complaining to the municipality about, but nothing gets done about them,” she said.

Residents from Campbell, one of the townships in Musina, claim to have reported a list of complaints, dating back to at least five years, to the municipality. “We don’t have constant water supply in our area. Taps run dry at any time without notice. I have been engaging with the VDM and Limpopo Premier for a long time, to no avail. We never experienced any water inconsistencies when the water authority was under our local municipality. The erratic supply only started when VDM took over as water authority,” said Sewani Kaunda, a community member from Campbell Township.

VDM’s spokesperson, Mr Matodzi Ralushai, confirmed the water challenges in Campbell Township. “It is true that water supply to Campbell section in Musina is not sustainable due to huge water demand, while only one reservoir is being filled. Two reservoirs constructed by the mine cannot be used based on technical assessment. The municipality as intervention has been using water trucks to assist the Campbell community while busy constructing pipelines to Matswale Extension 14. Only one line was supplying both Campbell and Matswale Extension 14, which resulted in water shortages,” he said in response to a media enquiry, adding that the operation and maintenance team were on site and that the constructed line might be completed by Sunday, 23 May.

Last week a video circulated on social media, showing a contractor erecting a stand for a water tank at Nancefield Municipality at night. Some residents had received a tip-off about it and rushed to the municipality, in time to catch the contractor busy erecting the stand. This followed complaints that the municipality was not providing water to Nancefield residents in last week’s publication of Limpopo Mirror, without a response from the municipality to this paper’s media enquiry.

“We were surprised why a contractor was doing the job at night. On arriving at the scene, we discovered that the contractor was doing a shoddy job. The contractor used cheap material to erect the stand, which is risky to the community and municipal workers at Nancefield,” said Ben Morudi, one of the residents who went out to inspect the suspicious activity.

Musina Municipality had once again not responded to a media enquiry by the time this paper went to press.