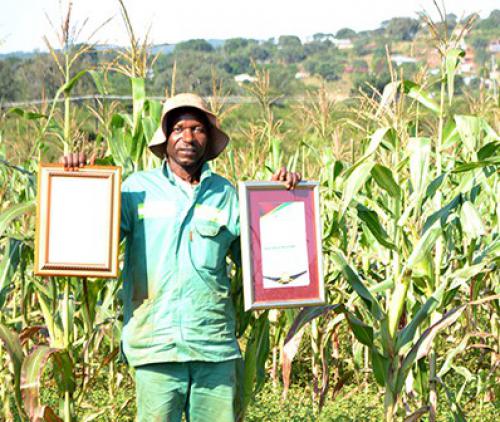 Maanda Michael Mafhege, a blind farmer from Dzingahe, shows the certificate of recognition he was awarded by the community of Dzingahe, as well as one of the certificates he received from the Department of Agriculture and Rural Development for being a dedicated farmer. Photo: Silas Nduvheni.

Living with a disability does not necessarily mean one is unable to do anything. At least, this is how Mr Maanda Michael Mafhege, a blind farmer from Vondwe village near Dzingahe outside Thohoyandou, interprets the situation.

Mafhege (44) was recently honoured by the Dzingahe Community with a certificate of recognition after he had donated the produce grown on his four-hectare orchard in Dzingahe to organisations for the disabled, at funerals, and among the local community.

Ms Marubini Munyangane, one of the community members, described Mafhege as a dedicated and hardworking farmer in the village and said that his contribution to food security had to be recognised and acknowledged.

“Little did we know that, when he came to ask for the land to develop his orchard, he would give back to the community what he has produced,” said Munyangane. “The village communities want to give him recognition for this while he is still alive.”

At the same time, they also voiced their concerns about thieves who steal Mafhege’s crops. “Stealing from a blind farmer … They should be ashamed of themselves and we urge those responsible to stop it,” Munyangane said.

Mafhege first started farming in the backyard of his home in Vondwe when he was a young boy, and today grows, among other things, butternuts, maize, tomatoes, sugar beans and cabbages.

“I was not born blind. The blindness just suddenly came while I was in the 11th Grade in 1997. When I went to the doctor, I was diagnosed with glaucoma – an eye condition that damages the optic nerve and causes blindness, and could never see again since then. But I thank God that I never let my disability worsen my circumstances,” he said.

Mafhege said he had never begged anybody for food, because he got up in the morning and did things for himself, despite being blind.

Aside from the recent recognition certificate he got from the Dzingahe communities, he has also won several accolades from the Department of Agriculture and Rural Development for being a dedicated farmer, despite his blindness.

He has, however, encountered his own challenges brought on by the Covid-19 pandemic, which have hampered his production. He wishes to make an appeal to anyone who can help him erect a barbed wire to prevent thieves from stealing his crops.