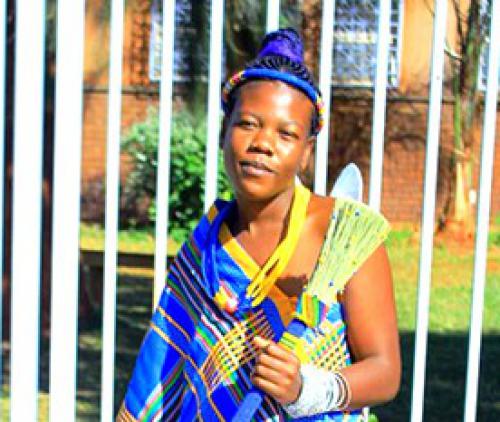 Unarine's legacy is to create pieces of art from beads

Twenty-six-year-old Unarine Mutshatshi is exceptionally skilled at making the most beautiful beaded items and her products are in very high demand.

This skill was taught to her by her mother, Ms Maria Sambo, who was also involved in the beaded-art trade since Unarine can remember.

“I grew up making beaded items with my mom,” she said. “I enjoyed sitting beside her on a sack at home as she fashioned the beads into the most amazing things, which she then sold to people. The people who ordered something specific from her would always express their satisfaction with the end results.”

Unarine was born in Ngwenani ya ha Mapholi, but later moved to Ha-Mavhunda village, where she continued her schooling at Vhembe TVET College. She studied financial management from 2015 to 2016.

“That was where I got the idea to start my own business, making beaded art. Many people, both lecturers and students, showed interest in my colourful, beaded items,” she said. “Some bought from the selection which I had, while others placed orders with specifications on how they wanted their products to be. I realised then that that was a trade I could surely follow. But it took time to get there.”

When she was still not fully functional in 2018, moving forward at a snail’s pace, Unarine’s friend, Muofhe Sengani, prodded her to register and open a business. “She said she could see that I was talented and that I should take my talent to the next level. And I did exactly that.” She named her business Beads by Una.

Unarine has found joy in the beaded-art trade. To her this work is a kind of therapy. “Making art from beads rejuvenates me,” she said. “It gives me a sense of belonging as an African woman. More so, it’s something you can’t wait to pass on to the next generation.”

She specialises in makunda, mapala, tshikanzwa, tshipulo, beaded tekkies, beaded broom bouquets and decorative dishes and flowerpots. “In fact, I can do anything; it all depends on a client’s request, and then I work on that art piece according to the client’s specifications,” she said.

She can sell her work countrywide, even beyond the borders of South Africa, via courier services. “Today we are so lucky to be able to market on social media and maximise our products,” she said. “My work is viable. I’ve even couriered to our neighbouring countries like Lesotho, Botswana, and Tanzania.”