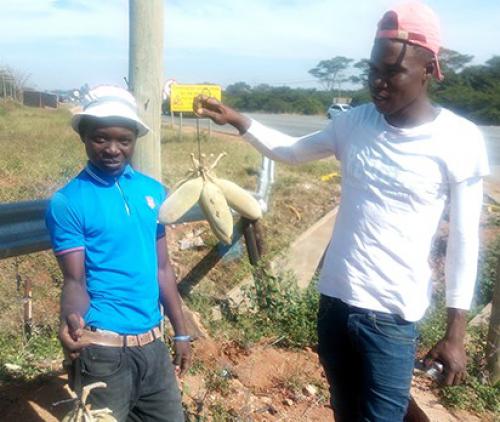 When Andries Musekwa, a Grade 9 pupil at Mamvuka Secondary School, realized that he could not go to school every day anymore, after the Department of Basic Education had introduced a rotational system in schools in line with the Covid-19 protocols, he decided to make the most of his free time by starting a small business.

When he is not at school, Andries travels the 80 km from Nzhelele to Louis Trichardt to sell baobab fruits along the N1 road near Makhado Crossing Mall to earn an income for himself, to relieve the financial burden on his grandmother.

“My mother passed away in 2007, and my father lives in Johannesburg. I am staying with my 71-year-old grandmother, who is unable to provide much for my daily needs with only her old-age pension,” he said. “I realised that this was a chance for me to run a small business that could earn me a little income to buy food and clothes. At night, I commit myself to studying.”

Andries lives in Mamvuka village, which is located near mountains. Baobab trees grow naturally in this area, and so he harvests the fruits and bags them for selling at the roadside.

When this newspaper asked him why he travelled so far to sell the fruits, he answered: “There is a good market for these fruits. In Nzhelele, no one will buy them, as they are readily available in the mountains.”

Andries’s goal is to sell at least 55 baobab fruits every day. He arrives at the selling point (at the traffic light next to Makhado Crossing Mall) by 09:00 in the morning and off-loads his fruit, which he sells at R5 each.

When he matriculates, he would like to enrol to study Law at the University of Venda.

Andries is also accompanied by his elder brother, Mashudu (25) when he goes out to sell his merchandise. Mashudu matriculated last year but could not further his education because he could not manage the study fees. Though Mashudu receives the R350 Social Relief Distress Grant, he feels this is not enough to live by. He is saving the little money he gets from their fruit sales to further his education.