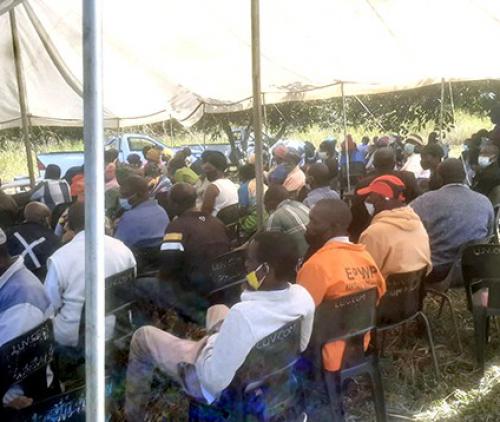 Some of the members of the Ravele Concerned Group during the past weekend's meeting.

More than 100 members of the Concerned Group from the Ravele Communal Property Association (CPA) gathered on a farm at Levubu last Saturday (15 May) to be informed of the latest developments in the ongoing dispute between the group and the CPA management.

The Concerned Group claim that, instead of benefiting from the CPA, they are being side-lined by them. They also accuse the CPA of maladministration and not using the funds for the purposes they should be used.

The Concerned Group claim to have sought assistance from the Department of Rural Development and Land Reform, as well as the Public Protector’s office, without success, and that is why they have decided to appoint an attorney and take the matter to court.

The Ravele CPA was established in 2004 in terms of the Communal Property Association Act. Five farms were handed to the association in 2006 who, at the time, had 807 beneficiaries.

Levubu is a very fertile farming area where, among others, macadamia nuts and bananas are produced. The Concerned Group is opposed to the way in which affairs are run by the current CPA committee.

Noel Nemauluma, a member of the Concerned Group, claims that they have been sent from pillar to post in trying to address the ‘ills’ going on within the CPA.

“We tried to approach the Department of Rural Development and Land Reform (at district, provincial and national levels) about our concerns with the current CPA, but nothing has changed. The Provincial Office in 2019 advised us to be part of the verification process, but the same office allowed the committee to remove our names as beneficiaries. The process failed and another verification was called, but members aligned to the Concerned Group were not allowed to enter the venue of the verification process. Again, the process failed,” said Nemauluma, adding that workers at the Levubu farms had informed them about lootings going on at the farms.

Mr Nelson Netshisahulu, chairperson of the Ravele CPA Board, refused to comment on the accusations levelled against the current committee.