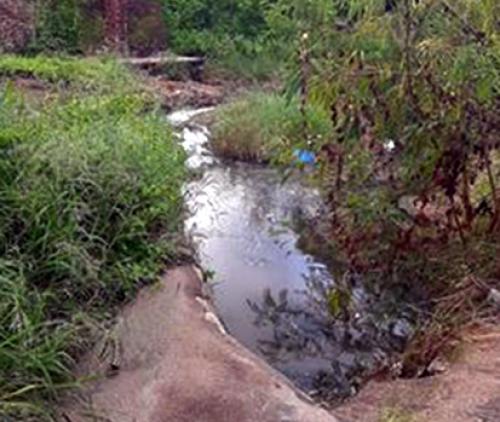 Sewage flowing down the street opposite Eric Louw High School. Limpopo Mirror rreported on the matter in April, but up to now, the problem has not been fixed.

Musina residents call on province to intervene and restore services

“We really feel that the Musina we once knew is gone,” said Mr Glen Rifumuni Malungane. He is one of many residents who feel that the local and the district municipality have let them down and that service delivery is simply getting worse.

“We don’t know what has gone wrong. Only five years ago, we didn’t have water interruptions,” he said. He blamed the Vhembe District Municipality (VDM) for the water problems, saying these had escalated since the VDM had taken over this function.

Residents living near Eric Louw High School said they had been complaining and calling the relevant authorities to address the sewage blockages. Raw sewage has been flowing down the street opposite the school.

“My mother lives right in that street and for months they have been subjected to the bad smell. I called Musina Local Municipality, but was referred to the VDM. In an attempt to get the mess sorted out, I called the VDM several times, but no one picks up the calls,” said Alesia Warren.

According to Warren, the street in question is a busy one and residents usually walk up and down that street late in the day, going for exercise. Learners going to Eric Louw also use the street. “Who is going to be responsible if these learners get sick?” asked Warren.

Gerhard Van Vuuren, another resident living close to the street, said: “This has been going on for years and the municipality is not coming up with a lasting solution. If one drives along the road, it means you are driving on sewage, leaving your vehicle smelling.”

Community members are now appealing to the provincial government to intervene. Mr Malungane, one of the community leaders, said that he felt particularly sorry for the people who lived in the Matswale RDP houses. “These people spend almost two weeks at a time without water. It is painful to think how they can live without water for so long.”

He thanked Venetia Mine for offering their help in maintaining their roads and repairing the constant burst water pipes, because if they did not do so, Malungane said, these issues would never be resolved.

A resident staying next to the street confirmed on 18 May that the sewer had not been fixed.

On Tuesday, VDM spokesperson Mr Matodzi Ralushai said that all sewerage challenges are being attended to and a contractor will be appointed to address the problem quickly.