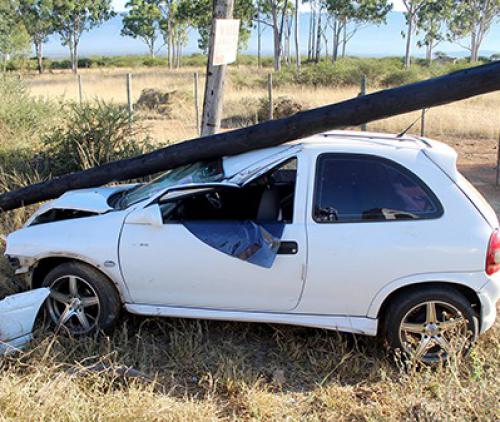 Two people driving on the D3715 Road escaped with their lives last Saturday after the driver lost control of his vehicle and hit an electricity pole, which fell on top of the car. Photo: Kaizer Nengovhela.

Two people escaped with their lives after what could have been another fatal accident on the D3715 road, when the driver lost control of his vehicle and hit an electricity pole, which fell on top of the car.

The accident happened last Saturday morning (15 May) at the bend of the road at Tshiozwi, where so many accidents have occurred in the past.

Mr Dalas Mukwevho, an eyewitness who was standing nearby when the accident occurred, told Limpopo Mirror that he first heard a loud crash and then someone screaming for help, and he rushed to the scene.

A crowd of onlookers gathered at the scene. Traffic came to a standstill for more than 30 minutes while traffic officers cleared the road. One of the ambulances who arrived at the scene of the accident was hit from behind by an oncoming vehicle, but no-one was hurt. Medical workers from another emergency service stepped in to rescue the driver, who was trapped inside his vehicle, while an injured passenger was lying on the ground next to the car. They had both lost consciousness by then. The occupants, identified as Norman Maliaga and Thuso Muruylana, were rushed to Louis Trichardt Memorial Hospital for treatment and discharged again later.

The ‘Road of Death’ between Sinthumule and Kutama has claimed several lives since October 2019. Communities have been complaining about the state of this road, with its dangerous potholes and stray animals, for a long time. Re-construction thereof started three months ago, yet in the past two months, seven more accidents occurred between the D959 and the D3715 road, killing four and injuring 16 people.

The chairperson of the Zoutpansberg Development Forum, Mr Patrick Sikhutshi, again warned motorists who use the Sinthumule and Kutama road not to drink and drive. He said that drivers must always drive with extreme caution as these roads were dangerous. “Let us rather pull over and rest if we feel tired and arrive safely at our destinations,” he said.