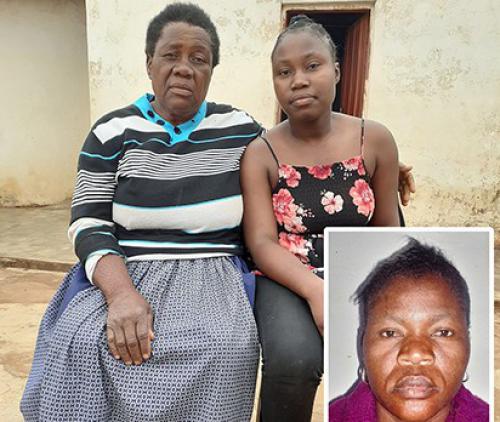 Ms Sophy Mbambala has been a pillar of strength to her granddaughter, Unarine Mbambala, who sorely misses her mother, Rendani Mbambala. Picture: Tshifhiwa Mukwevho. Inset: Ms Rendani Mbambala went missing around 2014 and her family is still looking for her.

"Please help us find my mother"

Unarine, who resides at Ha-Mandiwana in Nzhelele, last saw her mother in 2013 when she was only 15. She will be 22 this year, and her eyes still shine with hidden tears when she talks or thinks about her mother.

“I miss my mother and it pains me a lot not to know where she is,” she said. “Even though I had finished my matric last year, it was a struggle for me, since I had to study ten times harder to ensure that I passed. Not knowing where my mother is, whether she is happy or not, whether she is still alive or not, is hard for me. Please help us find my mother,” she pleaded.

According to Unarine’s maternal grandmother, Ms Sophy Mbambala, Rendani went to Kwaggafontein after her brother had offered her a job in his pharmacy in 2012. “She worked there for nearly two years and then she vanished in 2014,” Sophy said. “We have been looking for her ever since, without any success. Those in Kwaggafontein told us they had no idea where Rendani might have gone to.”

She said that, once Unarine started talking about her mother, comforting her became impossible. “She cries most of the time and then goes next door to my son’s yard to her aunty, Sylvia, where she will cry more. Sylvia tries to comfort her.”

Ms Sylvia Mbambala said: “When I got married into this family years ago, I was told that my husband’s sister, Unarine’s mother, was missing. It pained me to hear that. But now it pains me each time I see this child sobbing. The only thing that will wipe her tears away is the sight of her mother, or at least any information that can lead to her whereabouts.”

According to Sophy, the most painful part of Rendani’s disappearance is that her (Sophy’s) two other children had since passed away and that Rendani could not attend her brothers’ funerals. “It’s been very hard to trace her, and I feel lonelier in that my children had passed away and here she too is missing. One of my children passed many years ago when Rendani was around, though. I am really hurting. I pray my daughter comes back home, so that my granddaughter can find joy in her life.”

The case had been reported at the police station in Kwaggafontein and the last time they inquired (some four years ago), there had been no news.

Anyone who might have information on Rendani Mbambala’s whereabouts is asked to contact Mr Tshifhe Mbambala on Tel 072 212 3761.