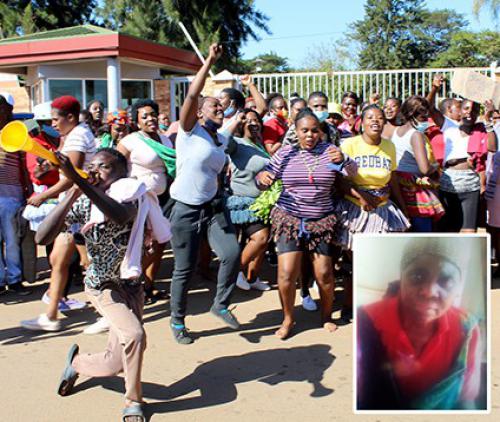 “Whoever did that evil act to the aged lady needs to be totally removed from society,” said Cllr Percy Mashimbi on Wednesday. He was one of several people who picketed outside the Waterval Magistrate’s Court, where a suspect appeared in connection with the brutal rape and murder of an 82-year-old lady.

The body of granny Nyanisi Shivambu of Bungeni Mtsetweni was discovered last Wednesday (5th) morning by a neighbour. She had apparently been killed the previous day. The body of the granny had several open wounds to her face and head, indicating that she had been stabbed with a sharp object.

Provincial police spokesperson Brig Motlafela Mojapelo said that the attacker seemed to have forced his way into the granny’s house. She was sleeping and alone in the house when the incident happened. Mojapelo said that the attacker had allegedly raped and stabbed his victim in the head with a sharp object and taken her cellphone. The body was found by community members inside the room, and they called the police.

A 22-year-old suspect, Remember Shivambu, was allegedly found in possession of the deceased’s cellphone and was arrested in connection with the rape and murder. He appeared in court on Wednesday (12th) and the case was postponed to 21 July, when a bail application is expected to be heard. He remains in custody.

Brigadier Mojapelo said that the police investigations would continue. “We have opened a case of murder, rape and theft,” he said.

A large crowd gathered at the magistrate’s court in Waterval on Wednesday. Mr Abel Khosa, a community representative who picketed outside the courtroom, said the scourge of murders and rapes in the area had caused the community to reach boiling point. “Everyone must stand up and fight that all murderers be removed from the community. If something is not done now, we are all going to perish as a result of murder. We will never rest until we win this war against these cruel people, who live on human blood,” he said.

The incident came as a huge shock to the murdered granny’s family. The grandson of the deceased, Bongani Ndleve, said that his grandmother had lived alone. “She was a much-loved person, and we did not expect her to leave us in such a horrible manner,” he said. “Imagine a defenceless granny of her age being strangled and raped. We were robbed of a very loving grandmother, who made sure that we got whatever we wanted,” he said. “I have accepted her death, but I will never forgive the murderer. The murderer does not deserve to live with people, but with wild animals in the bush.”

Percy Mashimbi, a councillor from the Collins Chabane Municipality, condemned the act of rape and said that in a society where women should be respected and celebrated, such an act was barbaric. “Anyone who commits such a dastardly crime is not a real man.” Mashimbi said the community wanted the suspect to rot in jail. “We want him to face the might of the law, and if it means to rot in jail, let it be like that,” he said.