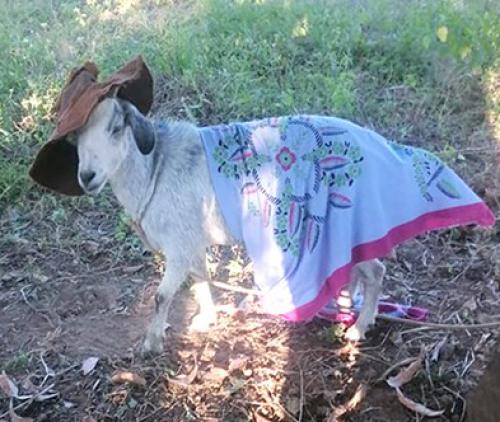 Villagers dressed up the goat and tried to force the man to marry it in an effort to shame and punish him. Photo supplied.

Man told to “marry” goat he had raped

A man who had allegedly had sex with a goat was forced by local villagers to “marry” the animal as punishment. The animal was even dressed up for the occasion.

The incident only came to the fore on Monday (26th) when the Louis Trichardt SPCA’s Senior Inspector Lawrence Khodobo was called out the investigate a report of a man who had allegedly had sex with a goat at a village not far from Elim. He was, however, disappointed to find out that the incident had occurred a week before, on 19 April.

Rather than report the matter to the police immediately after it happened, the villagers and local headman decided to exact their own punishment by dressing up the goat, taking it to the man and allegedly trying to force him to marry the goat.

Because the man was never charged with the act of bestiality, he was not arrested and did not appear in court. The local community members have, from what could be established, started to dish out their own punishment. “The sad part is, this man is married with children and everywhere his children now go, people are mocking them by making goat-like noises,” said Ms Alicia Thomas of the local SPCA.

The SPCA confiscated the abused animal, which is now in safe keeping.

Bestiality is defined as the sexual abuse by a human being of an animal and is a criminal offence. “The mere definition minimises the brutality involved in the act; the violation of a lesser being by one who possesses an element of power,” said Thomas.

Thomas added that this horrendous act of cruelty was very common and rife in the region and the country at this day and age. “The most challenging issue is bringing these individuals to justice, that they can be sentenced and not be able to hurt any other animals or humans again,” said Thomas.

Thomas said that the founding director of Women & Men Against Child Abuse, Ms Miranda Jordan, links the abuse of animals to child abuse. “It has been well researched since the 1980s, that cruelty towards and abuse of animals is a significant indicator of violence towards human sexuality, and this includes rape, child rape and murder,” states Jordan. She further emphasises: “The seriousness of animal cruelty cannot be minimized by the courts when perpetrators are brought before them as by merely giving them a slap on the wrist as they allow a dangerous person back into their community.”

According to Thomas, the man in question has been caught performing similar acts on previous occasions. Regarding the last incident, the man afterwards claimed that he could not remember what happened, as he had been severely intoxicated.

“We at our SPCA would like to send out this message and plead with the public to report any cases of animal cruelty to us, immediately. Time is of essence in these cases. We have to act within 24 hours of this horrendous crime taking place and the animal in question has to be examined by a veterinarian as soon as possible to obtain the necessary proof,” said Thomas.

A few things that could help them strengthen these cases are photos, video footage and the willingness of eyewitnesses to testify. “We cannot help any animals without those who are willing to speak up for them,” said Thomas. She urged members of the public to report bestiality or any other animal-cruelty cases they might know of immediately to inspector Khodobo at Tel 082 965 5151.