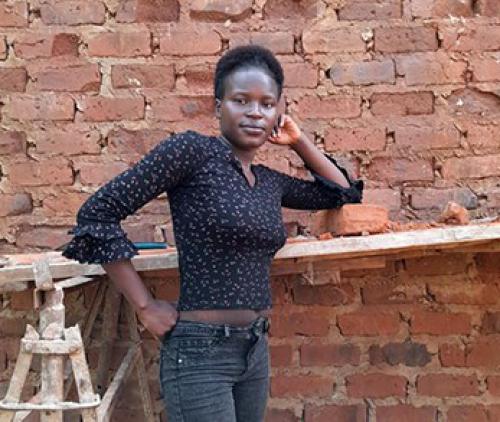 Azwihangwisi Matevhula in front of her own building project - an outside room at her family's RDP house in Makonde village. She wants to continue studying bricklaying as soon as she has finished her Grade 12.

Azwihangwisi is building her future brick by brick

The 22-year-old Azwihangwisi Matevhula’s life up until now has not been an easy one. She used to share a crowded RDP house with 12 family members at Makonde village, not far from Thohoyandou. Instead of accepting her situation, this young woman decided to “do her own thing” and build her own room.

“I tried to figure out what to do to lift myself out of the situation, and the only option for me was to get up, look for building tools and material and get started,” she said.

She was inspired and encouraged by her brother, who is an accomplished builder himself. “I would go to work with him to help him and learn at the same time.” He taught her everything she needed to know about building. “Unfortunately, he moved to Polokwane before I could master the trade. With the little knowledge I had, though, I was able to apply it to my own project. When I got stuck, I would give him a call and he helped me until I had finished my project,” she said.

Azwihangwisi is busy completing her Grade 12, which she does part-time. When she is done with this, she wants to study bricklaying. “One thing I learned is that one does not have to listen to the negatives to succeed in life. With the skills I have acquired, my aim now is to get my own tools and get started, and I would appreciate whatever assistance I can get to help me realize my dream,” she said.

Her dream is to start her own construction company that will empower women. “To other women out there, I say stand up and be independent. Do things for yourself and do not wait for hand-outs,” she said.

This determined young lady has just had an offer from a woman who works in construction, who has offered to take Azwihangwisi under her wing and mentor her.