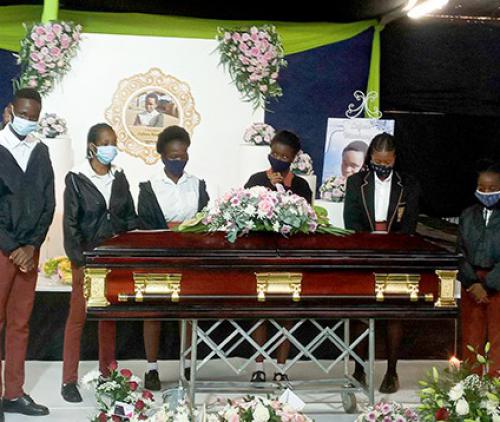 Pupils from Mbilwi Secondary School paid their last respects to Lufuno Mavhunga at the funeral service.

“Our only sin was to send our daughter to school.” These were the words of Dakalo Netshivhazwaulu, who spoke on behalf of the Mavhunga family at the funeral service of Lufuno Mavhunga, the Grade 10 girl from Mbilwi Secondary School who had committed suicide after allegedly being bullied at school.

Lufuno’s death made national headlines last week after an incident where she was allegedly bullied on the school terrain and a video capturing the incident had gone viral on social media. Not long after the incident, Lufuno committed suicide by overdosing on pills.

Lufuno was laid to rest at the Tshirenzheni Cemetery in Nzhelele on Saturday, 17 April. The service was held at the Spirit Ambassadors Ministries International Church in Tshirenzheni.

Netshivhazwaulu said the family members felt that they had lost Lufuno because of their wish for her to be educated. “We had hope in the Department of Education. To Mbilwi Secondary, we want to say this: that you correct all that is wrong [at your school], so that no other family ever has to cry like we did,” he said.

Netshivhazwaulu described Lufuno as an intelligent child who loved education. “She wanted to become a medical doctor,” he said. When her coffin was lowered, a stethoscope had been placed on it. “We had high hopes for her. It hurt us terribly to see our daughter exposed in such a manner. Our hearts are breaking; let us grieve for our daughter.”

Deputy Minister Siweya said she was deeply saddened by the incident. “We have failed Lufuno. All of us. We must not think that depression is not real,” she said. “The classroom should be a safe place. We must teach our girls to protect one another. We should correct where we are wrong, to honour Lufuno.”

The girl who was arrested for the assault on Lufuno is still being kept at a youth centre as her case was postponed until Thursday, 22 April. The spokesperson for the National Prosecuting Authority (NPA) in Limpopo, Ms Mashudu Malabi-Dzhangi, said the case would be rolled over to the 22nd for a new presiding officer to be appointed.