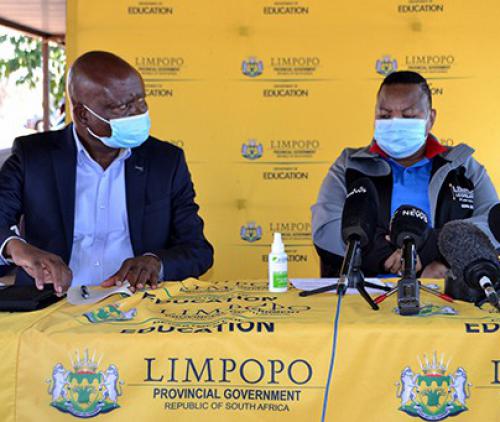 The MEC for Education, Ms Polly Boshielo (right), addresses the school community of Jim Chavani Secondary, as well as the media, while the executive mayor of the VDM, Dowelani Nenguda (left) looks on. Photo: Silas Nduvheni.

A sombre mood hangs over the Jim Chavani Secondary School in Xikundu village outside Malamulele, following a horrific car crash in which six of the school’s pupils were killed and eight seriously injured.

Mike Maringa, media liaison officer for the Department of Transport and Community Safety, confirmed that the accident occurred on the D98 Road at Ximixoni village on Friday, 16 April.

According to the provincial police spokesperson, Brig Motlafela Mojapelo, six school children died when the Toyota Hilux they were travelling in smashed into a house at Ximixoni village at around 14:10.

The school children from Jim Chavani Secondary School reportedly got a lift from a 19-year-old boy, who allegedly lost control over the vehicle and smashed into a house. The vehicle overturned and the six children were killed instantly, while eight more were seriously injured.

The MEC for Education, Ms Polly Boshielo, the MEC for Social Development, Ms Nkakareng Rakgoale, the executive mayor of the Vhembe District Municipality (VDM), Dowelani Nenguda, and Collins Chabane’s mayor, Moses Maluleke, visited the school on Monday. The two MECs interacted with the school’s pupils and visited the families affected by the accident. A task team was established to help with preparations for the six deceased children’s funerals.

MEC Rakgoale said that social workers were deployed and had started providing psychological support to the affected families. “We understand that when parents send their children to school, they hope they will come back safely. This incident, however, has left a number of parents in deep mourning. We appeal to the community at large, as well as the school community, not to point fingers at anyone,” said MEC Boshielo.

The traditional leader of the village, Hosi Thomas Maluleke, said the accident had left the village devastated. “Parents should not let their young children who don’t have driver’s licenses drive their cars as they could end up causing accidents,” he said.

Nyiko Chauke, a close friend of Vukosi Ringani’s, said he felt deeply affected by his friend’s death. “I still feel traumatized by his death. I never expected something like this to happen. He planned on becoming a teacher. His death has robbed me of a dear and trusted friend,” Nyiko said.