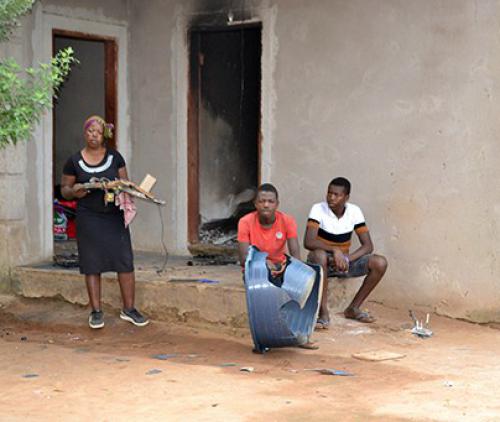 Ms Shawell Shaba shows some of their possessions that were destroyed after the two-room house they rented was set alight. Also (seated) in the photo is Takunda Shaba and Romish Gotori. Photo: Silas Nduvheni.

A Zimbabwean family had to vacate their house at Mulodi village near Thengwe after angry community members had set it on fire. The villagers turned on foreigners, following the death of a young man earlier this month.

The body of a 29-year-old man was found lying next to the street on Saturday, 3 April, with an open wound to his head. The deceased was identified as Rolivhuwa Ratshitanga, a resident of the Mulodi-Thembaluvhilo village.

According to Limpopo police spokesperson Colonel Moatshe Ngoepe, angry community members started accusing a Zimbabwean man living in the village of being involved in the murder. They became aggressive and broke the windows of the rented two-room house where the man and his wife lived and set it on fire.

The attack on the house occurred on Sunday (4 April) and, according to a report from the Mutale SAPS, the Zimbabwean man then ran away. His wife was not inside the house at the time it was set alight and was therefore unharmed.

A ward committee member in Mulodi village, Mr Rudzani Netshikweta, said that the villagers suspected the Zimbabwean man in question of being behind Ratshitanga’s murder, as the two had apparently had a bitter argument during a drinking spree at the local tavern the night before. Netshikweta said that the Sunday after the body of Ratshitanga had been discovered, villagers had gathered at the headman’s kraal to discuss the matter. During this meeting, a decision was taken that anyone harbouring foreign nationals, such as Zimbabweans, should let them go.

“We resolved that we don’t want to see any Zimbabweans in our village anymore, because it is the fourth incident in our area now where a Zimbabwean citizen is accused of killing our people. It is enough now; let them go peacefully,” said Netshikweta.

He said that the conduct of the villagers might be described as xenophobic but claimed that the “bad behaviour” of Zimbabweans, “who don’t respect the lives of others”, was to blame. He said that ending the life of another human being was wrong.

No arrests have been made yet, and the police in the Mutale policing area are investigating a case of murder.