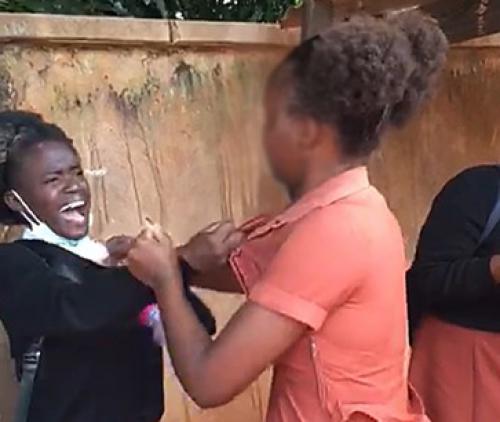 A screenshot from the video that circulated on social media of the late Lufuno Mavhunga, a 15-year-old learner at Mbilwe Secondary School, being physically bullied. She commited suicide shortly afterwards.

A 15-year-old girl from Mbilwi Secondary School was arrested on Tuesday in connection with the bullying incident that played out at the school on Monday. A young learner from the same school, who was the victim of the assault, allegedly committed suicide on Monday afternoon.

Video clips of the girl being harassed started circulating on Monday, not long after the incident took place. The video footage shows a group of girls in Mbilwi uniform confronting another schoolgirl, identified as Lufuno Mavhungu. One girl starts to hit Lufuno violently and repeatedly, pushing her around and pulling at her hair while the rest surround them. While this is happening a crowd of amused onlookers take videos using their cell phones from different angles. Lufuno doesn’t fight back and no-one tries to help her while this abuse goes on and on.

Provincial police spokesperson Brigadier Motlafela Mojapelo confirmed Lufuno’s death. “The police in Siloam outside Thohoyandou have opened an inquest case after a 15-year-old girl allegedly died on arrival at the Siloam hospital on Monday evening of 12 April 2021 at about 18:30,” he said.

According to the police statement, Lufuno arrived home from school that day and told her mother that she was beaten up by another learner. She then locked herself up in her room and allegedly consumed an overdose of pills. Her mother later found Lufuno unconscious in her room and she was rushed to hospital. The police received a call from Siloam hospital, who informed them that Lufuno was brought in and certified dead on arrival at the hospital.

On Tuesday, after news of her death was made public, social media platforms were abuzz with the “#JusticeforLufuno” topic. At Mbilwi Secondary School children cried uncontrollably and the angry ones vied for the blood of the “bully”.

Apparently, this was not the first case of bullying of this nature at the school. In fact, according to some learners of Mbilwi Secondary, bullying has become a “common thing” at their top school.

One learner, who preferred to remain anonymous, said they were angry at the school management for acting as if everything was normal, while they knew what had happened. “We are very angry. More especially because we hear that the parents have previously reported to the principal (on the bullying), but nothing was done about it,” she said. “We are not safe there, so many fights have taken place even here on our school premises. We want justice for Lufuno and the perpetrator should face the music and be expelled from school,” she said.

Judging by Lufuno’s social media postings, she was clearly affected by some sort of bullying. She called herself ‘Trash Boat’ on social media which, according to the Urban dictionary, means an undesirable/unwanted/rejected person or object.

The incident has been widely condemned from different sectors.

The chairperson for the Limpopo School Governing Bodies, Prince Phandavhudzi, described the incident as a “very sad and unfortunate” one. He urged parents not to wait for the worse, but to report all incidents of bullying to the principals and school governing bodies.

Education MEC Poly Boshielo said that the incident was a sad day in education and the school. “It is quite disturbing to witness this level of violent behaviour among young people. We strongly condemn such conduct that has turned our schools into horrendous havens of those who have no regard for their peers. Bullying is wrong and will never be tolerated in our schools,” she said.
“We send our condolences to the family and friends of the deceased learner and pledge our commitment towards ensuring that all those involved in bullying incidents are made to face the consequences of their actions,” she added.

On Wednesday the SAPS issued a statement in which the arrest of a 15-year-old suspect in connection with the alleged assault is confirmed. “The arrested child will be dealt with in accordance with the Child Justice Act,” the police said.

The Department of Education in Limpopo is also investigating the circumstances that lead to the death of the 15-year-old Grade 10 learner from Mbilwi Secondary School.

Lieba Brothers Group Funeral Services, with the help of Shanzha Holdings and Sebola Inc, have offered to do the funeral proceeding for free for the Mavhungu family.