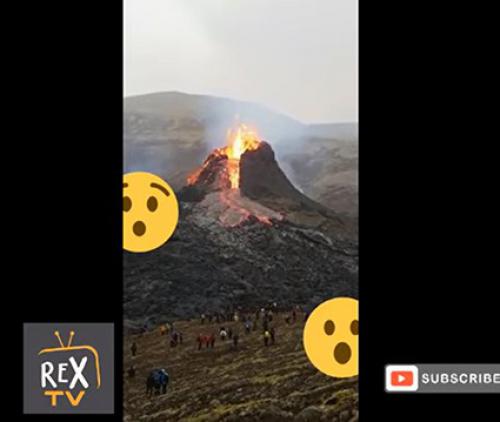 A screen capture of the "active volcano" at Matangari, posted by a certain Rex TV.

Fake reports of a volcano erupting at Matangari village, not far from Thohoyandou, caused panic last Thursday. A video showing the mountain spewing out lava spread like wildfire on social media and caused people from across the country to enquire whether friends and relatives in the area were safe.

The video, put up on the YouTube channel of a certain Rex TV, is under the heading “The danger of active volcano at Venda (Matangari).” The so-called producer calls himself “Lover Rex”. While the video is playing, a male voice can be heard saying in Tshivenda: “zwo itea vhana vha mukalaha, hanefha Matangari, ila volcano ye hapfi ainga thuthubi khei I khou thuthuba.” (It is happening now in Matangari village, the volcano they said is not active is now erupting.)

The video seems to have ignited a lot of fear among the communities of Matangari, especially those who work far from their homes. One such resident, Bongani Chabalala, said it was just after 20:00 and he was watching TV with his family at his home in Matombo atsuka Matangari when calls and WhatsApp messages started flooding in, asking him if it was true about the volcanic eruption. “A lot of people called me. Some even sent me videos on WhatsApp. I was scared,” he said. “At that moment, I had even forgotten that I am staying near the mountain.”

Chabalala said he went out to check if a volcano was indeed erupting from the top of the mountain. “I didn’t see anything,” he said.

He went on to warn the “filmmaker”: “Please don’t play like this. A volcano is not something to play with. There are people in Gauteng who are scared for their families back home,” he told the “Lover Rex”. Chabalala said he had been living in Matangari for the past 38 years and he had never heard of any rumours of volcanic eruptions in the area.

The traditional leader in Matangari village, Mutulagole Nyamande, confirmed that no volcano can be found in Matangari village. “Considering the volume of calls I have received from universities, research institutions, security clusters, fire stations, chiefs from neighbouring villages, disaster teams, and villagers at home and abroad, there was a lot of panic and unrest,” Nyamande said. “I really want to send a warning to whoever has sent or posted the video clip not to do that again in future.”

A quick Internet search shows that the conniving “producer” used video footage taken at Mount Fagradalsfjall. This volcano is located only about 40 kilometres from the capital of Iceland, Reykjavik. The volcano erupted last month for the first time in about 900 years, causing a colourful spectacle that quickly attracted spectators from afar.

Unscrupulous opportunists often use YouTube channels and social media platforms to try and make “a quick buck”. They create what is often referred to as “click bait”, consisting of messages or videos set up to entice people to click on them or visit the site. In the case of a YouTube channel, the “producer” tries to get as many people as possible to watch the video. The video channel then draws advertising, for which he or she gets paid.

In the case of Rex TV, the channel has apparently not been monetised yet. No adverts, apart from the channel’s own, were displayed.