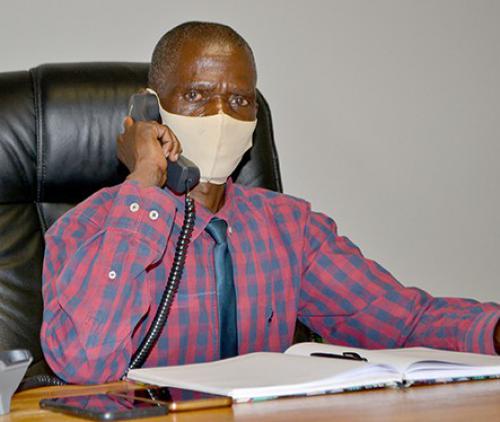 Lt-Col Mashudu Alex Malelo retired after 35 years of service in the SAPS. Photo by Silas Nduvheni.

“Top cop” in Vhembe retires after 35 years of service

At the end of March this year Lt- Col Mashudu Alex Malelo arrived at the office for the last time. This “top cop” of the SA Police Service retired after nearly 35 years’ service.

Malelo joined the police force back in 1985, when it was still called the Venda National Force (VNF). He started his police career at the bottom, as a constable.

In 1998 he joined the SAPS Corporate Communication and Liaison Unit in the Vhembe region, under the command of former spokesperson and head of corporate communication, Lt- Colonel Ailwei Mushavhanamadi. After Mushavhanamadi moved on to the University of Venda in 2010, Malelo was promoted to head this unit.

Malelo received a number of awards, medals and accolades as acknowledgement for his hard work and dedication during his time in the police service. “I regarded being a police officer as my calling from God. I never joined the Force just to have a job, as one has to work under pressure, be willing to work overtime and on public holidays. As a police officer, you also work with criminals, who retaliate and fight the police when they are caught. I thank God that I made retirement alive; so many of my co-workers have died in the line of duty,” he said.

Malelo’s advice to police officers is to refrain from taking part in any form of corruption. He said that officers are often tempted with bribes, but that the only thing that can come from giving in to it, is putting their jobs at risk. He said that he was lucky to have never been faced with disciplinary actions against him in all his years in the Force. “I kept focused on my work and obeyed the rules and regulations that were laid out to guide police officers.”

He said that his position at the Communication Unit was always very interesting. “I interacted with various media groups who needed to be provided with specific information within certain deadlines. I enjoyed the experience as spokesperson very much,” Malelo said.