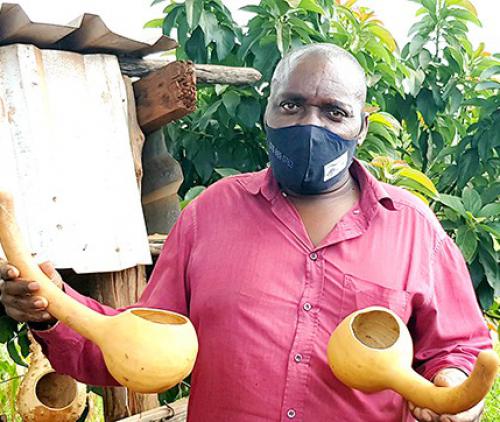 Mr Balanganani Edwin Nemafhohoni holds some of the khavho he makes and sells to the public.

Nemafhohoni responds to his dreams and keeps culture alive

“My father, Jack Nemafhohoni, died in 1969, but in 2014 he appeared in my dreams, instructing me to establish a traditional garden where I should plant indigenous plants to produce traditional, home-made utensils. I took it very seriously because in our culture, you have to respect what the dead communicate to you in a dream.”

These are the words of Mr Balanganani Edwin Nemafhohoni of Ha-Makhuvha village, near Donald Fraser Hospital. Nemafhohoni makes a living by producing these utensils that he sells to the public. He is also one of the few males who make pots out of clay by hand. He has his makeshift stall opposite Matatshe business centre, next to the busy Thohoyandou-Donald Fraser road.

A wood artist as well, Nemafhohoni’s art dates back to the time when he was still in primary school. “I always excelled when it came to handwork. The wooden spoons, door mats and table mats that I made were taken by teachers and never returned to me. I now produce wooden plates (ndilo), wooden spoons (mpfo), wooden knives (phanga), walking sticks (thonga) and spears (mapfumo) with my own hands.”

He said he had tried to work for various companies, but his instincts never stopped bothering him to be his own boss. “I had to come back to my senses and start doing what God has brought me into this world for. Now I’m at peace because I am doing what my heart desires. My wish is to build a showroom where young people will be able to come and see these traditional utensils that are helping to preserve our future. I also have a dream of establishing a traditional-art school where I will teach young children the skills of producing these traditional utensils. Those who want to be taught how to make these utensils can contact me on my mobile number, 071 245 5020.”

Among one of his unique traditional products is a Ngota, a calabash with a small opening on top that was used by traditional healers to store powdered medication. “I had to make sure that Ngota comes back to life, because a lot of people these days know nothing about it. It is a very good storage container that keeps the contents fresh for a very long time. In the olden days, young boys also used Ngota to store drinking water when they went to the veld to look after cattle and goats. I am happy because traditional healers from different places are buying Ngota from me to store their medicines.”

He said his unique initiative was sustainable because he had a small piece of land that he utilised to plant indigenous plants. “When ripe, these traditional plants produce some products that are dried to produce traditional utensils like zwitemba, phaphana, ngota and khavho. I make sure that I have enough seeds for these traditional plants, so that I never run out of supply for my products.”

As a renowned shoe repairer, Nemafhohoni keeps himself busy by repairing shoes while waiting for customers to come and buy his traditional utensils.