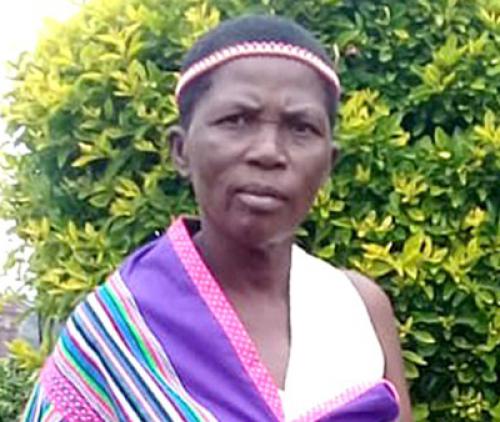 The late Ms Azwinndini Eunice Davhula, who was murdered in her house at Vuwani-Hamanavhela village. Photo supplied.

The murder of a 59-year-old woman from Vuwani-Hamanavhela village, allegedly by a 17-year-old young man, has led to yet another incident of mob justice. This time the suspect was set alight by outraged members of the community while he was in the custody of the police.

Ms Azwinndini Eunice Davhula lived alone in her big house. According to reports, she woke up on the morning of 11 March and noticed that her pot of porridge had been stolen from her kitchen. She then discovered someone’s hat in her house. Davhula reported the incident to the members of the local Community Policing Forum (CPF) and the Civic Association. After an investigation was conducted, the hat was determined to belong to a 17-year-old fellow villager named Muhali Makhado. Makhado was allegedly known to have a history of clashing with law enforcers and had been accused of, among other crimes, theft.

However, on the night of 1 April, an attacker broke into the house of Ms Davhula and stabbed her with a sharp object. She died in a pool of blood. Her house was ransacked and items such as her television and cellphone were stolen.

When Muhali Makhado became aware of rumours in the village that he was the prime suspect and that people were looking for him, he went to the police station on Saturday (3rd) and surrendered himself. The next day (Sunday) the police accompanied him to visit the scene where he had allegedly killed Davhula. When the villagers saw him there, they apparently started throwing sticks and stones, overpowering the police officers, and then attacked Makhado before he was set on fire.

Limpopo police spokesperson Brigadier Motlafela Mojapelo confirmed that the Vuwani police are investigating a case of murder. “Police officers were conducting a routine patrol on Friday morning (2nd) when they received a report that a woman was found dead in a pool of blood at her house. She had multiple injuries and her clothes were also burnt,” Mojapelo said.

A preliminary police investigation revealed that her house was ransacked and her plasma TV and cellphone stolen.

In a press statement released on Sunday, the SAPS confirmed the attack on police members and the killing of a suspect. The incident reportedly happened while the police and the suspect were visiting the house of the murdered woman. “Community members emerged and started throwing stones and wooden sticks at the members,” the statement reads.

Members of the Public Order Policing Unit were called to assist and disperse the crowd, but this did not work. According to the police, rubber bullets were fired, but the crowd managed to hit the suspect with stones. He was grabbed and set alight.

At the time of our going to press, no suspects had been arrested in connection with the attack on the police or the killing. The police investigations are continuing.

Pastor Patrick Mawelewele said that the family members were still traumatised. He said that the dispute over the stolen pot of porridge was being handled by the local Civic Association and that Davhula had been willing to forgive Makhado. They still could not believe that he might have killed her.

Mr Jeremiah Murovhi, member of the local Civic Association, said that they, as community leaders, were still baffled by the incident. He confirmed that the association had been notified about the dispute between Davhula and Makhado but said that the matter was a small one that was being handled by the local Civic Association. “We never thought he would (allegedly) act out so viciously and brutally kill an innocent person.”