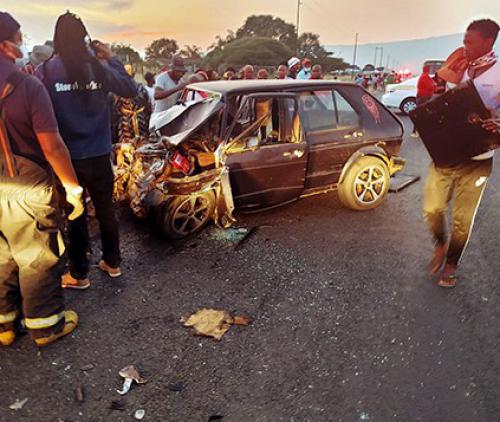 One of the vehicles involved in the head-on collision on the D3715-road in the Tshiozwi area over the Easter Holiday.

“Road of Death” claims another victim

The D3715-road has claimed yet another life over the past Easter Holiday after two vehicles were involved in a head-on collision in the Tshiozwi area. The accident occurred on Saturday (3 April).

This specific road in the Sinthumule-Kutama area has been named the “road of death”, following a spate of fatal road accidents over the last few years. The road has always been considered a hazard with its dangerous potholes and ever-present stray animals. Since October 2019, 14 people have died on the same stretch of road.

The deceased, identified as Mr Tendani Ramovha (30), was allegedly travelling on the dilapidated road when his sedan struck the safety barrier on the opposite side and collided head-on with another vehicle. Rescue workers had to use the Jaws of Life to free him from the wreckage. Ramovha died at the scene. Four other people were injured and rushed to the Louis Trichardt Memorial Hospital for medical treatment. They were all discharged from hospital the same day.

Road users travelling between Tshiozwi and Madombidzha area had to use alternative roads as the road was closed for hours.

According to the provincial police spokesperson, Brig Motlafela Mojapelo, the incident occurred at around 17:50. “We have opened a case of culpable homicide, following the incident, but investigations continue,” said Mojapelo. He urged motorists to drive carefully on that road, as it has many potholes.

The chairperson of the Zoutpansberg Community Development Forum, Mr Patrick Sikhutshi, conveyed his condolences to the family, loved ones and friends of the deceased. “It is with the deepest sympathy to the bereaved family, friends and everyone who was close to the late Ramovha that we learned of his sudden passing away,” he said and reminded the bereaved family and friends that they are not alone in this difficult time.

Mr Bono Ramovha said that the family members were deeply saddened by the death of Ramovha as he was regarded as an important part of the family. “We are truly devastated as we have lost a pillar in the family. Everyone looked up to him for advice. He dedicated his life to serving the community without expecting anything in return. We will have to accept it, because God's will has been done,” he said.

Ramovha will be buried on Saturday (10th) at the Ravele cemetery. The service will start at 06:00.