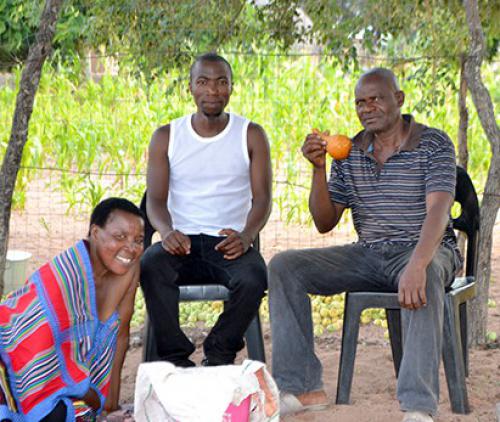 One of the brewers of marula beer, Humbelani Mulaudzi of Shakadza village, (seated on the left) and Tshedza Ndwammbi happily watched as Tshibuleni Mmbengwa drank some of her marula brew, as part of the annual marula-beer-tasting tradition.

When the marula fruit starts to ripen between January and March each year, the Vhavenda people know the time has come to start making U luma mukumbi/Ukuluma Vukanyi (marula beer).

Traditionally, the leaders and elderly men from the villages are the first to taste the fruit’s ripeness and then officially announce its readiness to be brewed. This marula-tasting ceremony, led by the traditional leaders and elders, is accepted as a symbol of respect.

Khosi Mukhesi Tshivhase, a traditional leader of Tshidimbini village, had his first tasting for the year during a gathering in Muswodi-Dipeni in the Niani area last Saturday. “We now encourage marula beer brewers to start brewing and we urge people around to enjoy the beer peacefully and respectful of each other,” Tshivhase said. “We will also have a ceremony in the chief’s kraal, called muhwedzo, where brewers will bring some beer to the chief (to be tasted).”

Tshivhase, who took over the Tshidimbini cooperative that was created by his late father, Khosi Tomboni Tshivhase, encouraged brewers, especially in the Niani area, to also form a cooperative during this season, so that they can empower themselves economically.

“We hope from now onwards that the marula brewers will have an opportunity to collect the fruits and start brewing the beer. The beer can be a money-making project. Some brewers might be able to smile all the way to the bank this season,” he said.

One of the marula beer brewers, Ms Humbelani Mulaudzi of Shakadza village, said that she and other women had already started to brew beer from the fruit, but that theirs was not for sale. People are invited to join them and drink freely.

“We are pleasing our ancestors during this time and I invited my relatives, community members, and traditional leaders to come to my home and taste the beer, as I don’t sell it for profit.  I have more than ten years of experience in brewing the beer and I have never sold it but take it as a time to gather with relatives and communities to celebrate the beer,” Mulaudzi said.

The Limpopo Department of Economic Development, Environment and Tourism has cancelled the annual Limpopo Marula Festival, which was supposed to be held in Ba-Phalaborwa Municipality during the month of February. Mr Zaid Kala, spokesperson for the department, said that the festival had been cancelled because of to the Covid-19 pandemic.