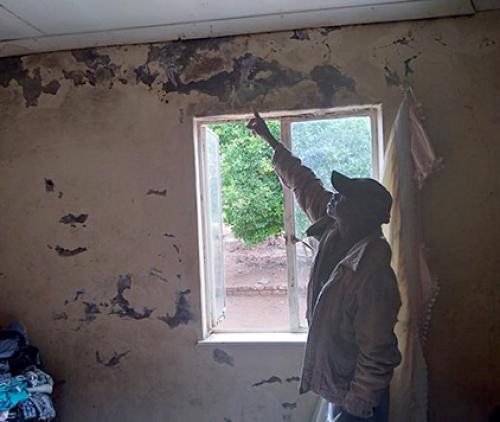 Emmanuel Ramashia points at the wet spots in one of the rooms in his house where the roof leaks.

Many residents of Mulenzhe, Ha-Budeli and Tshilungoma had to fix the roofs of the houses supplied by the Department of Water and Sanitation. The roofs started leaking, causing the new owners to pay for having them fixed. They are now insisting that the department reimburse them for the expenses.

Around 2002, most of the affected families were re-located to houses already constructed by the Department of Water and Sanitation, but Solomon Baloyi, chairperson of the Nandoni Complaints Resolution Committee, said that most of the houses had leaking roofs. “The department did not do a good job, as more than 400 houses have leaking roofs,” Baloyi said. He is calling on President Cyril Ramaphosa to intervene.

Limpopo Mirror visited some of the affected households on 5 February this year. Emmanuel Ramashia (69) told the reporter that his family had sleepless nights, especially during the rainy season. Ramashia also relocated in 2002 and occupies a five-room house in Ha-Budeli village.

“When it rains, all five rooms leak, and we have a hard time sleeping. Sometimes we put buckets where it leaks or have to move our beds and other furniture around, but that does not help much. We are afraid our furniture will break if we continue moving it around like this,” Ramashia said.

Ramashia showed the damp ceilings and where the water runs down the walls. A strong, damp smell comes from some of the rooms. Ramashia has 10 children. One of the children, who preferred to remain anonymous, said that they worried a lot when the rain came. She said that she had to find plastic to cover herself when the rain came down hard, like it did on Thursday, 4 February.

Munyai Kholelani, who also lives in Budeli village, decided to fix the leakages in his home himself. Kholelani is unemployed and depends on casual jobs. “I could not take it anymore, so I had to do odd jobs to fix the leakages. I spent R3 000 to reroof the two rooms. I could not wait anymore for the government to do it, but I hope to be reimbursed,” said Kholelani.

Limpopo Mirror sent a query to Sputnik Ratau, spokesperson for the Department of Water and Sanitation, via email on Monday, 8 February, and telephoned him again on Friday, 12 February, but the department had not responded to the query at the time of our going to press.