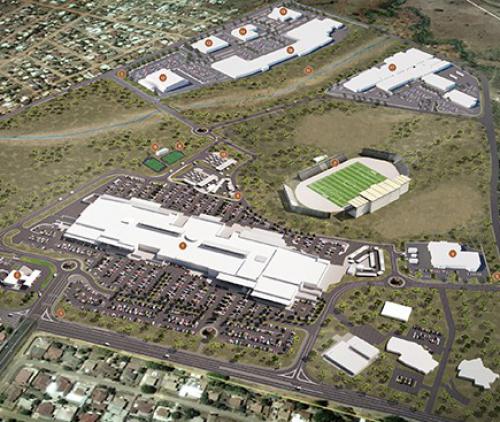 An artist's impression of the new Thavhani City, which shows where future expansion is planned.

Thavhani City in Thohoyandou, which incorporates the Thavhani Mall, is set to expand rapidly in the next few months with the addition of a motor dealership and a health-care centre.

The developers, Flanagan & Gerard, announced this week that an agreement has been struck with the NTT Motor Group for a 2 700m² Toyota dealership and service centre, which will open at the end of 2021. This is envisaged to be the anchor tenant for the new Thavhani City Motor City.

Paul Gerard, the managing director of Flanagan & Gerard, said that a scarcity of motor dealerships and service centres for the people of Thohoyandou and its surrounding towns and villages currently existed. “We can also confirm that we are in discussions with several other major brands to join the Motor City, which will be a 20 000m² hub of dedicated motor dealerships, service centres and parts retailers,” he said.

Construction work at the NHC health-care centre at Thavhani City is at an advanced stage and the project is expected to be completed in the first half of this year. “The 3 500m² day clinic will employ 30 medical professionals and 30 general staff in an environmentally innovative building that includes solar energy and backup power generation,” said Gerard. The medical services offered to the community at the facility include a nursery school, radiology, pathology, dialysis, baby clinic, general practitioner, psychologies, physiotherapy, biokinetics, occupational therapist and audiologist.

Gerard also said that discussions with a private healthcare group were at an advanced stage for the establishment of a 300-bed hospital at Thavhani City.