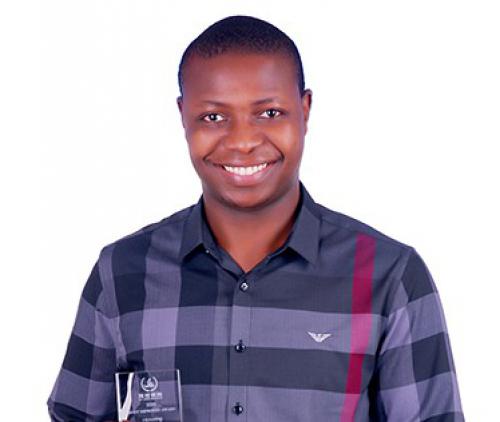 Mashudu Tshikororo, who hails from Miluwani in Thohoyandou, has found his niche in teaching and this profession has taken him as far as securing a teaching post in China. On 29 January this year he was awarded for his hard work by the Hai Cheng Education department. Picture supplied.

Mashudu finds his teaching niche in China and wins award

Mashudu Tshikororo, who hails from Miluwani in Thohoyandou, has found his niche in teaching. This profession has taken him as far as securing a teaching post in China, where he currently teaches at the Hangzhou Experimental Foreign Language School in Zhejiang Province, Hangzhou.

“I applied for a teaching post in China and my application was successful, so I moved to China,” Tshikororo told the media. “My life as a worker in China has been a revealing experience in that it was actually quite easy for me to adapt to their local culture.”

He explains that the Chinese language and culture are rooted in tradition, which is unique when compared to the African culture. But, he said, there are also many shades of both African and Chinese cultures that intertwine in some ways.

“Foreigners who work in China often encounter a bit of a culture shock,” he said. “For example, the term ‘foreigner’ is still widely used in China, which some expats find alienating. I had to research more about their culture to avoid unnecessary awkwardness, and perhaps (unintentionally) breaking the country's law.”

He pointed out that one of the best things about living in China for him is the food, which is cheap, varied and flavourful, and very different to African cuisine.

“It was a bit difficult for me to adjust to most of their food at first,” he said. “I had to target what was familiar to me and sometimes I would order a few ingredients and products from my lovely home country, South Africa. Some cultural behaviours I found fascinating, for example, you accept or offer a business card with two hands; always take your shoes off before entering someone’s home; never tip (give extra money) to a Chinese, as they find it offensive and be appreciative of any food that is offered to you. In a nutshell, the Chinese culture varies a lot from South African culture.”

His teaching subjects are English and Science, and he has been enjoying his work since he moved to China in 2019. On 29 January this year he was awarded for his hard work by the Hai Cheng Education department. “I work really hard, with a deepened passion for my work,” he said. “I maintain a good relationship with my students. When students recognise that a teacher truly wants the best for them, they are willing to try harder in the classroom, and also enjoy the class.”

“I am also author of two books, called You're Wired in a Special Way and Water of Life in a Foreign Glass,” he said. “The Rainbow cannot be Black & White is my third book, which will be launched this year.”

Tshikororo said that the only route to success is through hard work and to discard the spirit of procrastination. “The same effort you put in for your make-up, manicure, pedicure, hairstyles, fashion tips and other cosmetics, must be put in for your success,” he said. “Greater success calls for greater effort. If you can put an effort into make-up, you can make an effort for a certificate, diploma, degree, honours, masters or PhD. The most powerful weapon on earth is the human soul on fire – a drive to achieve, a zeal to succeed and a heart to endure the test of time.”