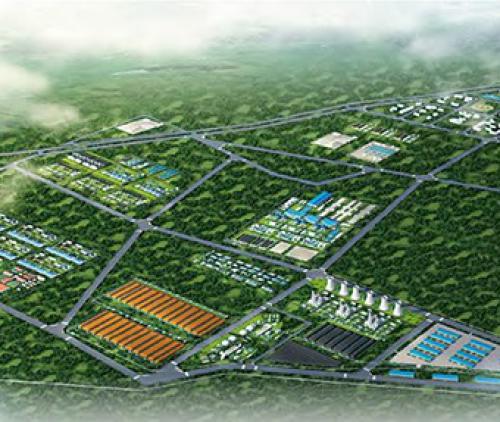 A schematic illustration of the SEZ. Source: PPT Presentation on Pre-Feasibility Study on Mutasshi-Special Economic Zone.

The final Environmental Impact Assessment (EIA) report for the phased development of the Musina-Makhado Special Economic Zone (MMSEZ) was submitted to the provincial department of Economic Development Environment and Tourism (LEDET) on 1 February. This followed after LEDET refused to grant any further extension in timeframes for the completion of the report.

This refusal has sparked a public outcry and many believe this is a clear indication that the EIA process is nothing more than a paper exercise for government to “rubber stamp” a predetermined outcome.

Various groups and institutions requested an extension of time to complete the EIA. Even the provincial government’s own Environmental Assessment Practitioner (EAP) appointed to conduct the EIA, Delta Built Environment Consultants (Delta BEC), requested that the date be extended to 31 March. In response to their request, LEDET replied: “The Environmental Assessment Practitioner is reminded of the letter dated 26/10/2020 wherein it was stated that the environmental impact assessment process for this project was way long outside the prescribed timeframes and no further extension on timeframes would be granted by the Department.” The cut-off date for the submission of the final EIA report was 31 January this year, but seeing that it was a Sunday, the report was submitted the following day.

The third and final round of public participation meetings was, due to the time-constraints imposed by LEDET, scheduled to take place from 6 January 2021 to 14 January this year. These meetings were, however, scheduled in accordance with the Covid-19 Alert Level 1 restrictions applicable last year. On 28 December the country was placed on adjusted Alert Level 3, which meant that no physical meetings were allowed. The physical meetings scheduled were thus cancelled and Delta BEC tried to overcome the problem by arranging virtual meetings for 20 and 21 January 2021. These meeting were, however, poorly attended and excluded those who did not have access to the Internet or data.

The MMSEZ comprises two sites. The first site, Artonvilla, is located in Musina, while the second site, known as the Southern SEZ, is located some 50 km south of Musina at Bokmakierie. It comprises 8 022 hectares of land. The Department of Trade and Industry (DTI) approved the development of the MMSEZ in July 2017 as part of their National Development Plan (NDP) which aims to eliminate poverty and reduce inequality by 2030.

According to Delta BEC’s own estimates, the objective of the MMSEZ is to create 53 800 jobs of which 95% will be local jobs. The EIA submitted on 1 February was for the granting of environmental authorisation to start clearing the site. The National Environmental Management Act (NEMA) stipulates that an EIA needs to be conducted for the clearance of an area of 20 hectares or more of indigenous vegetation, or the clearance of 300 square metres or more of indigenous vegetation within a critical biodiversity area.

From the onset, the proposed MMSEZ was marred by controversy. Three rounds of public meetings were held, the first taking place in September last year and in total 2 000 interested and affected parties (I&AP) registered for the process. More than 100 objections against the proposed MMSEZ were received, including objections from SOLVE (Safe our Limpopo Valley), Christo Reeders Attorneys, Circle Law Advocate Chambers, CALS, the Centre for Environmental Rights, EarthLife, Limpopo Eco-Industrial Park and Ekland Safari’s, just to name a few. These parties’ objections related specifically to the Southern SEZ, siting among others negative climate change factors, a scarcity of water and a lack of transparency of who the investors for this SEZ are, as reasons.

Time-constraints leads to risks and limitations of EIA report

In their executive summary as preface to the final EIA report, Delta BEC pointed out that LEDET’s refusal to grant an extension of time places considerable limitations and restrictions on them, the applicant (LEDA) and the specialists to consider and address all of the comments presented by I&APs during the public participation which started on 1 September 2020. They said that they attended to what was possible during this time to address as far as possible the comments received and to identify any gaps that need to be addressed.

Regarding this, gaps exist in specialist reports relating to energy (a comprehensive specialist assessment of available energy sources for the proposed SEZ), biodiversity offset (validity and nett gain for relocation of protected trees needs to be verified in practice), air quality (acid rain impact once the SEZ is in operation on food security and agricultural sector), climate change (the risk of climate change on cultural heritage sites needs to be verified), waste (future industrial waste dump, even though a concept was not addressed and needs to be understood), water (feasibility study on water from Zimbabwe from DWS due to internal processes are not available yet) and a water feasibility study on the offtake dam in the Sand River is currently being conducted, of which information is not available to the EAP.

“Given the importance of this project and the implications it may have for the Limpopo province and South Africa and interest groups, due to the information gaps in the EIA report it is very challenging for the EAP to make a definitive opinion at present. Delta BEC submitted a letter to LEDET on 16 October 2020 and notified the LEDET of the gaps which were identified and requested that an independent reviewer review these aspects before the final EIA Report will be submitted to LEDET. LEDET did not respond, except for granting extension until 31 January 2021,” stated Delta BEC in their report. Regarding this, they made several recommendations that must be addressed before any environmental authorisation may be considered. Their recommendation, among others, included:

* It must be confirmed if no alternative site(s), with significant less environmental sensitivity and that may be suitable for development of the SEZ in a sustainable manner, can reasonably be identified and acquired within the Limpopo Province;

* A proven sustainable and affordable water supply must be secured and guaranteed for the proposed development.

* Alternative sources of bulk energy supply for the proposed SEZ site should be further investigated and it reasonably be confirmed that no other sustainable and affordable energy supply solution exists, confirmed by ESKOM. The mere fact that the site is located within the coal belt cannot be the main reason for developing another coal-fired power station as energy source for the SEZ development. Maximising renewable energy as well as the use of other off-site sources of energy must be considered as a condition for the development implementation;

* An avifauna assessment (Bird Study) must be undertaken to verify flight paths and raptors which may nest on the proposed project site and the detailed development design must take cognisance of this and mitigation measures proposed by a specialist must be implemented;

* Two species of sensitive protected bat species and invertebrates have been highlighted by I&APs as breeding and occurring on the proposed site (mopani worms) and this needs to be verified and addressed by a specialist and must be considered in any detail development design and mitigation measures applied as specified by a specialist. This has not been addressed nor updated by the Biodiversity specialist and is considered critical;

* Site-specific EIAs, permits, and licences for bulk infrastructure services and specific investor industrial plants need to be undertaken and be authorised prior to development taking place. No site clearance of the area should be allowed until investors have secured their respective licenses, permits and conditions for development to prevent ecological degradation of the site, if there is not certainty that the individual plants will proceed;

* The risks associated with acid rain from the proposed SEZ needs to be investigated and assessed by the air quality specialist and modelled. The impact thereof and proposed mitigation measures should also inform a decision on the authorisation of the SEZ’s subsequent plant specific environmental authorisations;

* Water Use Licenses need to be applied for and issued for the development;

* The Present Ecological State (PES) of all the wetlands and pans in the region was not assessed, nor was the role of these wetlands in the recharge of the surface water and groundwater systems. A wetland impact assessment addressing PES must be completed;

* An agricultural impact assessment needs to be undertaken for the operational phase of the proposed MMSEZ;

* A cost benefit analysis of the entire SEZ in an economic impact assessment must be undertaken to identify and finally confirm the benefits for jobs, the mineral beneficiation itself and the risk of developing such a large metallurgical complex and its impacts that it may have on the other industries in South Africa; and

* Detailed geotechnical investigations must be conducted prior to development as a basis for the detailed design of developments and structures.

Delta Bec concluded by stating that due to Covid-19 regulation, effective physical meetings should still be undertaken with traditional communities and the public once the alert levels has been adjusted, after 15 February 2021. “This was not confirmed nor rejected by LEDET whether these can still proceed or not,” said Delta BEC.

In the meantime, many fear that should LEDET approve the EIA for site clearing, it will set in motion a process that will be virtually unstoppable. The almost 1 000 page final EIA report can be view by visiting https://deltabec.com/eia-musina-makhado-special-economic-zone/c.