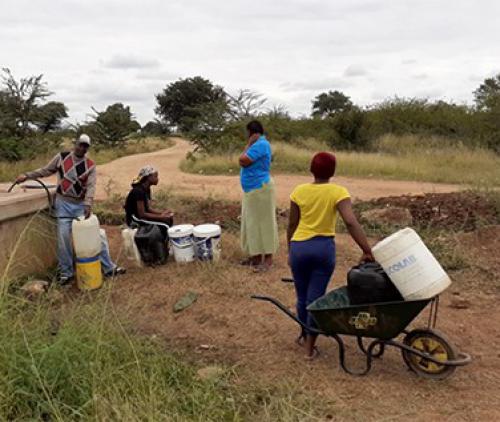 Residents fetch water from the nearby manhole, because they have no runnng water at Ndengeza RDP section. Picture: Tshifhiwa Mukwevho.

Despite the Department of Water and Sanitation’s status report on dams, which indicated last week that the Limpopo provincial water storage had increased slightly - rising from 59.9% in the previous week to 60.3% last week - residents in places such as the Ndengeza RDP section remain without access to water.

Limpopo Mirror was told that they had been without running water for more than three years now. They travel to the nearest villages where they must buy water from those who have boreholes at their homes. The cost of water ranges from R4 to R5 per 20- or 25-litre bottles or buckets.

Some of them carry their washing in wheelbarrows to do their washing right by the main R578 road, at the mainline valve holes. They have tampered with the valve to gain access to the water via a pipe that they connected to the main pipe’s valve. The temporary connection is tied with an elastic band around it, so that it does not leak.

A resident at the Ndengeza RDP section, Walter Mabunda, said that they had been without water for a full year now. “We fetch water from the main pipe valve system by the main R578 road,” he said. “At first we were afraid that we were doing a wrongful deed and would only sneak out to fetch water there at night. But as time went by, we realised that we were not committing any crime by helping ourselves to a basic right – water.”

In November 2019, Middle Letaba Dam was at a level of 2.8%. Since that time, the dam has not experienced any considerable rise. “Our struggle is real,” said a woman. “We are seven in our household and we need water for use every day. So, you can imagine our strain when we have to fork out bread money for water.”

While some dams in Vhembe District, such as the Mutshedzi, Nandoni and Vondo dams, currently stand at levels well over 100%, the Middle Letaba Dam remains fairly empty. The past week’s good rains caused the level to rise to 4,1% on Monday (1 February) and it should rise more, but this is pitiful in comparison with other dams.

Mopani District Municipality’s spokesperson, Mr Odas Ngobeni, said that the municipality knew that some of the communities around Middle-Letaba did not have access to a consistent supply of water, especially from the bulk supply, for two reasons:

“The dam level was only at 0.7% before the recent rains and we [were] advised by the Department of Water and Sanitation to stop abstracting water at the [Middle Letaba] dam,” he said. “We have tried to augment water at the dam with boreholes drilled around the water-treatment works, but the biggest problem remains illegal connections.”

He said that illegal connections would always be a concern for the municipality as long as the infrastructure was tampered with. “We have just concluded public consultations on the water services by-law, and once gazetted, we will be empowered to enforce the by-law,” he added.

Ngobeni said that the local municipality was supplying the Ndengeza RDP section through water tankers. “But we may need to go and drill boreholes for that section, guided by the advice from our technical unit and local structure there,” he said. “There is a reticulation system in that community with household connections. We also have a reservoir there. They are supposed to benefit from the bulk line to Magoro, but unfortunately, because of the low pressure, we are unable to fill the reservoir now.”

The Department of Water and Sanitation’s spokesperson, Sputnik Ratau, said that although the department acknowledged that this week’s slight increase was a positive development, Limpopo residents were urged to continue utilising water cautiously since they were not out of the woods yet.