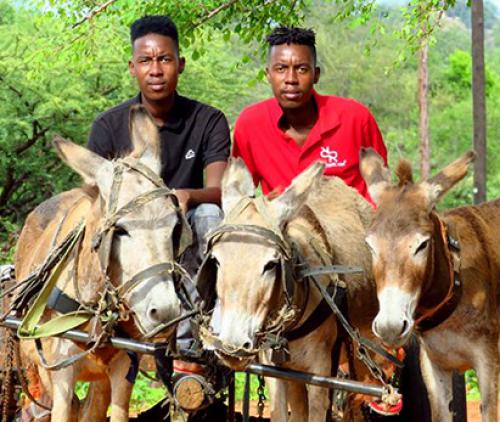 The Covid-19 pandemic has taught many people to become self-reliant and independent and often to acquire new skills. Comedian twin brothers from Mukununde Tshamutavha village have now turned to photography to supplement their income.

Charles Divhani Sigebe, known as Charles Wa Story, and Prince Mavhungu Sigebe, known as Prince Wa Miswaswo, became comedians in their village around 2010, but they say that Covid-19 demands from artists to be more creative in earning a living. “Shows are so rare now because of the pandemic and its consequences,” Charles said. “But we decided to be innovative and come up with other plans to earn a living.”

For the twins, ‘other plans’ meant photography, something that they realised by chance they were actually good at. “Since the lockdown was announced last year, we were worried about the pandemic and how it affects us all as a country,” Charles said. “But when restrictions were lifted, my brother and I started taking long strolls through the bushes to refresh our minds. One day, we decided to start taking photos of nature, using our phones, and occasionally we would also snap each other by accident.”

When they got home and scrolled through the assortment of photos they had taken, they were amazed at what they had produced. Some of their family members looked at the pictures too and were very impressed. “It was pure art,” Prince said proudly. “We came back from the bushes as newly graduated photographers of note.”

Not long after that, they started photographing people for a fee, and that was how they began Charles & Prince Photography. “We also help with modelling photography,” Charles explained. “We coach the models, and any other people whom we photograph, and boost their confidence before an actual photoshoot takes place. When it comes to modelling, we have so far helped over 100 people to gain confidence, and some of them get modelling deals here or there. We market models, help them to take part in modelling competitions and create social accounts for them.”