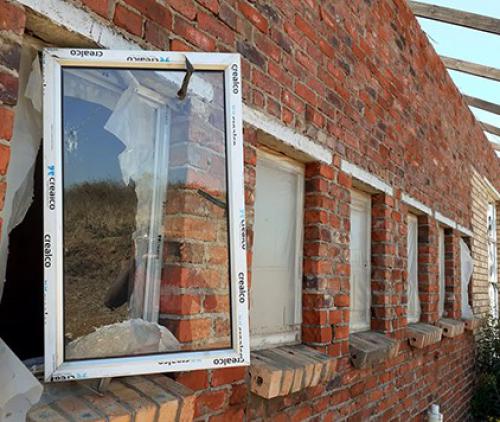 A window pane hanging loose in one of the half-built structures at Maila village. The NLC spent almost R26 million on this project, which is still incomplete.

How much of a difference can R26 million make in the lives of poor people struggling to eke out a living in a time when many are battling to put food on the table?

Last week we reported on how the National Lotteries Commission (NLC) had spent R26 million on an old-age home at Maila village, which the residents seemingly did not want.

Most of the money, R20 million, was allocated and paid out over the course of 2017. The NLC proceeded to pay out almost R6 million more, with the last tranche paid in 2019, despite the fact that no real progress had been made in completing the home.

Now, more than three years later, all that is visible of the multi-million-rand “investment” of public funds are half-built structures that are being systematically looted, and the site appears to have been abandoned.

The project raises many serious issues, with no one seemingly prepared to take responsibility for this debacle and the wasted millions.

One question yet to be answered is why the NLC decided to spend millions on an old-age home in a village where this is a foreign concept? People in Maila, and other rural villages around the country where the NLC has funded similar projects, do not put their aged in “homes” to be cared for by someone else. The elderly are taken into the homes of family members, where they are cared for.

As one villager pointed out, a centre for the aged with basic medical facilities and programmes to keep the senior citizens engaged and healthy would have made much more sense.

What is important to remember is that this is a project initiated by the NLC and not by the local community. NLC opted to give the money for the project to a dormant, non-compliant entity based in another province.

Why did the NLC choose a non-profit entity with no ties to this community that has no experience in managing multimillion-rand contracts, as it has done with many other major infrastructure projects it has funded? One might as well hand a stack of cash to a car guard you have just met at a shopping centre and ask him to put it in a bank and administer how it is spent.  And then, when you find out some of the money has gone missing, you blame the guy you gave the money to.

For all practical purposes, the Maila project is a gigantic waste of public funds. The NPO’s promise that it would (one day) be finished and then “we will all celebrate” is not convincing. Local community members who stated “the money has been chowed” are probably more correct.

The really sad part of this is what the R26 million could have achieved in such a small community. Maila village is not big and the people there are definitely not wealthy. The latest census figures (2011) indicate that 6 816 people, or 1 922 households, live here. Only 6% of the households earned more than R76 400 per year (R6 366 per month). And 250 of the families indicated that they had earned zero income for the year.

Even education levels are an indicator of how tough life is for many residents. Only 27,6% completed matric or a higher education.  In 2011, most residents (5 739) indicated that they used a non-ventilated pit toilet when nature called. In fact, only 116 stated that they had access to a flush toilet at their houses.

If the real intention were to assist the Maila village residents, the R26 million could have been better spent in many other ways. The quickest option would have been to split it up among the families, who would each have received R13 527. That would obviously not be the wisest thing to do, because not everyone in the village is needy.

Seeing that the project’s aim was to cater for the elderly, it would have been best to focus on them. The stats say that 444 residents are 65 years or older at Maila. If you divided the R26 million among them, you could have given each person R58 558. That is a lot of money, which could have helped them upgrade their houses, add water tanks, sink more boreholes, and build better toilets.

The comparison is not meant to suggest that money meant for infrastructure projects should be divided among residents, but rather to give a perspective on the difference the wasted millions could have made to peoples’ lives. In Vhembe, money is a scarce commodity that should never be wasted, because it directly affects the quality of life of the poorest people.

Perhaps the most worrying aspect of all is the lack of gatekeepers. Where are the ward councillors, the traditional leaders, the civic associations, or even the church leaders? The local headman seems to be aware of the project but did nothing to ensure that the community received the maximum benefit.

Given the dubious track record of the NLC, the local community leaders were possibly never informed about the extent of the project. And, even if they had had full insight into the project and the amounts involved, doubt exists whether they would have been able to curb the “chowing” of the money.

We have seen a similar scenario play out at other multi-million-rand Lottery-funded infrastructure projects in Vhembe over the past few years. At Vyeboom, R10 million has disappeared. At Mdabula, an existing stadium, which was merely given a lick of paint and very minor renovations, was used to siphon off more than R11 million. The list continues. These are just a few of the NLC projects investigative journalists have exposed. Apart from the journalists, the other gatekeepers were absent.

The impoverished communities are apparently used like battered wives. The ones holding the purse strings approach them with lots of promises. The communities are expected to be satisfied with the scraps left over after the Lottorpreneurs have feasted. Should the locals complain, they are threatened that they will lose the little bit they are getting. Like battered wives, they shut up, even defending the ones mistreating them. Instead, they are expected to “celebrate” the crumbs they have received.

In the case of Maila village’s old-age home, the NPO involved responded to questions by dismissing complaints from community members. “You see … if there is something untoward, the community will have long revolted,” was the reply.

This is simply disgusting, like an abuser telling people: “If my wife was unhappy, she would have left me…”

These villages will never be able to escape the cycle of poverty if people do not stand up. Maila village deserves more than half-built structures for a centre they never asked for. They deserve a better live, and if R26 million was earmarked to offer them a steppingstone to escape poverty, they must benefit from it.

The people who abuse communities such as Maila and use them as a means to corruptly extract Lottery grants must face the full might of the law.

The use of the vulnerable by corrupt people to enrich themselves must end and those responsible must be prosecuted and their ill-gotten gains confiscated. Because until they face the consequences, this abuse of public funds will continue.