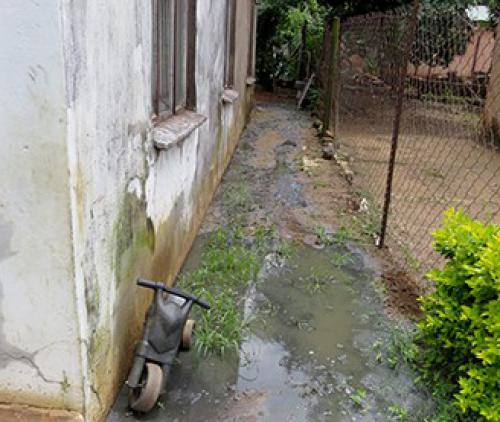 Sewage float around the yards at Tshikota. The damp seeps into the walls of their homes, causing them to crack.

“We've been drowning in sewage for a decade”

Families at Tshikota say they are still drowning in sewage after many, many years, and they fear that their lives are at risk.

Residents claim that the Vhembe District Municipality had, up until now, been unable to resolve this decade-old problem. Frequent blockages in the pipe systems cause sewage to flow into their homes, and they say that this is a breeding ground for water-borne diseases. When Limpopo Mirror visited the area on 31 January, several yards were flooded with wastewater.

Ms Joyce Madala of stand 1201 in Tshikota alleges that the local municipality is aware of their plight but does nothing. “We’ve been fighting since 2011; fighting for freedom, but till this day the municipality has been ignoring our calls and my house is covered in human faeces,” she said indignantly.

According to Madala, she cannot stop gagging and holds her nose because of the terrible stench. “It’s difficult to breathe. I can’t even eat because the smell is so strong,” she said. “We scoop human faeces out of our houses with our bare hands! We can't even afford to buy protective gloves.” Madala said that she had contacted the municipality about the problem on many occasions. The municipality’s officials apparently promised her that they would fix it, but nothing ever happened.

“It seems as if the municipality doesn’t care about our health, and my health is at risk now. I can’t even open the windows because of this terrible smell,” she said. “My children cannot play outside because of the human waste, and it’s not good for their health either,” she added.

She said even when the sewerage system would get unblocked, a few days later, another part of the same system blocked up again and spilt wastewater into their properties. “Where else can we go, because this is our home? They should help us,” pleaded Madala. She said that her furniture was damaged, and cracks had appeared all over the walls because of the water seeping into the walls.

Another resident, Ms Sibongile Raphalalani, said that they had been living with these unhealthy conditions for so long. “Our health is compromised, as well as our children's safety. We want the municipality to come and assist us before it is too late. They should redo the drains, start all over and reinstall new drainage systems because when they unblock one drain, the next one also gets blocked.”

The spokesperson for the Vhembe District Municipality, Mr Matodzi Ralushai, said that they were aware of the situation and that their technical department would address the problem very soon.