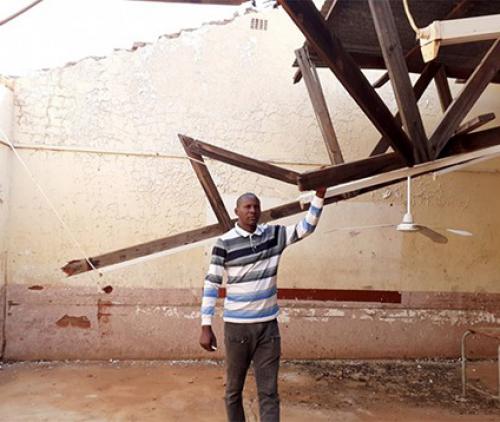 SGB chairperson Mr Gezani Chauke is seen here inside the classroom of a block that was damaged some three years ago. Picture: Tshifhiwa Mukwevho.

No classrooms for Maphophe's learners

As the opening of schools is fast approaching, pupils at Maphophe Primary School might have no classrooms for lessons. This comes after the seasonal storms torn off the roofing on two blocks of classrooms in December last year.

The chairperson of the school governing body (SGB), Mr Gezani Chauke, said that they had reported the incident to the district office of the Department of Education. “They registered our case, but they had not come back to us,” he said. “When we enquire, we are now given a deaf ear. This is frustrating because it is not the first time that the department has ill-treated us.”

Chauke said that they had previously reported that the department had not fixed the roofing of two blocks of classrooms that were damaged in a rainstorm about three years ago. “We applied for the school to be built from scratch, because there was literally nothing to fix on those two old blocks, but they sent some mobile classrooms instead, without our consent,” he said. “We don’t need mobile classrooms because they do not shut out the cold during winter. And they are boiling hot inside in summer.”

Maphophe Primary School is in Maphophe village, situated some seven kilometres outside Saselamani town in the Collins Chabane municipal area.

“Two mobile classrooms were delivered to our school following the first damage of the classrooms, but we still feel that the department should consider employing long-term measures for the school,” he said. “We need proper classrooms.”

Limpopo Department of Education’s spokesperson, Ms Tidimalo Chuene, confirmed the department’s receipt of a damage report. “The Department is aware of the state of the school,” she said. “We recently received a report from the circuit office and a technical team was thereafter dispatched to assess the damage. We have included the school on the list for provision of mobile classrooms.”

Chuene said that the school was also under consideration for a long-term solution, details of which would be shared as soon as they were finalised.

Schools have been scheduled to re-open on 15 February.