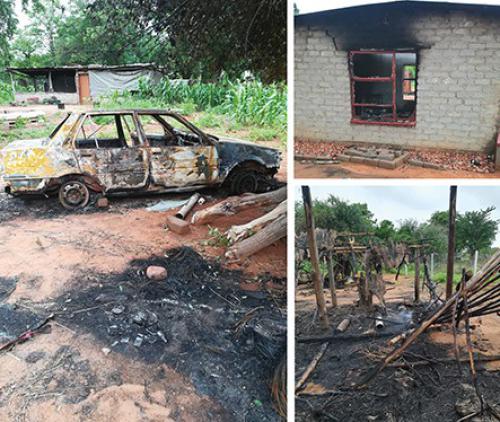 The photos (top and right) show the aftermatch of the mob attack. A vehicle was burnt out and the house and other structures were set alight by the mob. (Photos: SAPS Limpopo)

Four people from Mutele B Village outside Musina were stoned and set alight and their house torched by a furious mob, who accused these victims of being responsible for the disappearance of a local young man who had gone missing last week. They believed that he was murdered for ritual purposes.

Gumani Makhesha (25) was reported missing on 25 January by his family after he and a friend had allegedly taken a donkey cart to visit relatives in Makuya. Gumani never returned.

According to Thingahangwi Makhesha, the police searched for his younger brother throughout the area. Police divers were also called in as Gumani was suspected to have tried to cross the Mutale River and had possibly drowned. Thingahangwi said that they had received support from the community and businesspeople from around the area. Transport and food were donated to everyone in the community who helped to search for Gumani.

According to reports, the four victims were at home when they were attacked by the angry mob, who claimed that they (the victims) had been responsible for the disappearance of Gumani.

Limpopo police spokesperson Brig Motlafela Mojapelo said that a missing-person file had been opened at Makuya Police Station. He said that the angry community members had mobilised themselves on Monday, 1 February, and gone to the homestead of the local traditional healer, who had been accused of being responsible for the disappearance of Gumani. The mob torched his house and two motor vehicles. They then took the traditional healer, his son and two other persons and forcefully dragged them into the bushes, where they were stoned and burnt beyond recognition. Mojapelo said that 19 suspects had been arrested the following day in connection with the mob killing. They face charges of arson and murder.

In a further twist to the story, angry community members launched an attack on the Masisi Police Station on Tuesday evening, seemingly protesting the police’s arrest of the 19 suspects. “The angry crowd came to the police station, demanding the release of the suspects. They then started throwing stones and damaged two windows. The Public Order Police members were called to assist the local police and had to use rubber bullets to repel the crowd. One suspect was arrested for public violence and malicious damage to property. More arrests are expected,” said Mojapelo.

The attack on the police station was also condemned by the provincial police commissioner Lieutenant General Nneke Ledwaba. “We condemn this violence that is clearly aimed at bringing about lawlessness in the area. The police will be relentless in hunting down all those who participated in this violence. Community members are urged to assist the police in searching for the missing man and must desist from taking the law into their own hands,” said Ledwaba.

The four people killed during Monday’s mob justice were identified as the traditional healer, Mutshutshu Munyai (59), his son, Mushanganyisi Munyai (24), Maphanda Thakhani (26) and Mudzhelele Muvhango (38). The 19 suspects, aged between 27 and 37, are expected to appear in the Musina Magistrate’s Court soon on four counts of murder, arson, malicious damage to property and public violence.

People with information about the missing person (Gumani Makhesha) or that could lead to the arrest of the remaining suspects, are requested to contact Warrant Officer Madimabe Mhlavheni on Tel 082 414 2481, the Crime Stop number 08600 10111 or the nearest police station.