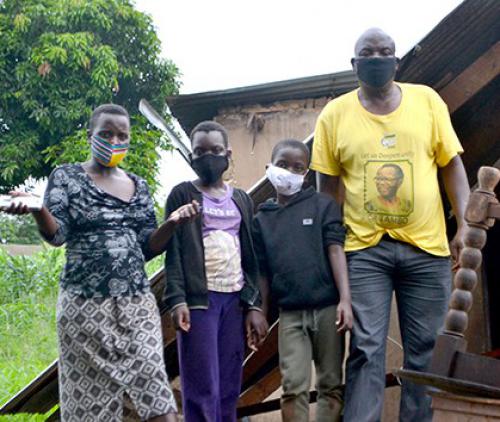 Life became a nightmare for a single mother, Azwifaneli Netshiluvhi of Mbaleni village near the Makwarela Township, after the heavy rains and storms brought on by tropical storm Eloise.

Netshiluvhi (40), who is a domestic worker, said that she and her three children, Khathutshelo Tshisikule (20), Livhuwani (13) and Mulamuleli (12), were lucky to be alive, after one part of their two-room house started to collapse at around 06:00 on Sunday morning.

Netshiluvhi is devastated and said that everything in the collapsed room, including her children’s books, school uniforms and a bag of maize meal, were soaked and could not be used anymore. The refrigerator with their meat and food was also damaged.

“One of my children, Mulamuleli, was also struck on his right ear and chin by the falling bricks during the incident, and he was hospitalized in Makwarela Clinic for treatment, but later discharged. Another child, Livhuwani, was forced to escape through a window, but luckily, she was unharmed. I thank God that my children and I are still alive,” said Netshiluvhi.

She is now appealing to the local Thulamela Municipality to build her an RDP house, because she does not feel safe to stay in the damaged house with her children anymore.

The traditional leader of Mbaleni, Chief Thithomelwi Mphaphuli, said that life for the villagers was hard after the damaging storm, and he had experienced no pleasure when he had to rush to Netshiluvhi’s house to see that a part of her house had collapsed.

Mphaphuli said he had informed the local ward representative, who had in turn informed the ward councillor, to investigate the damage. He said that he supported Netshiluvhi’s appeal to the district municipality to do something for her and her children, because they were now living under poor conditions.

The spokesperson for the Vhembe District Municipality, Matodzi Ralushai, said that the municipality’s disaster management team was busy assessing the damage to Netshiluvhi’s house and that she would form part of the households who would be receiving serious attention.