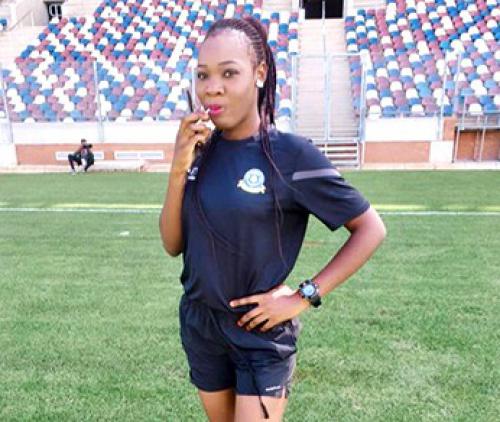 The world of professional sport may be dominated by men, but a young lady from Muledane is making her presence felt. Khodani Nyelisani is a health and fitness expert who has already become an indispensable part of local professional soccer teams.

The 26-year-old lady from Muledane outside Thohoyandou said that she had been a sports fan since she had been young. “I have always wondered why there were so few women in football. Then I got interested and started asking for career guidance in sports, and that’s when I chose to study biokinetics,” she said.

Nyelisani now holds an honours degree in biokinetics from the University of Venda.

“I studied Bachelor of Science in Biokinetics (BSBKP) at the University of Venda. BSBKP has always been a degree that people look down on,” she said. “We were discouraged even in school by being told that not many job opportunities exist. After graduation, other students started new degrees, because of the things they were told while we were still studying,” she added.

Nyelisani started as a volunteer at Tshakhuma Tsha Madzivhandila FC (TTM), until they registered her as their full-time biokinetic practitioner. “Biokinetics is a broad career which focuses on many aspects, hence I focused on physical fitness at TTM.  It opened many doors for me because I am currently working as a fitness trainer at Venda Football Academy, which is campaigning in the ABC Motsepe League.”

Nyelisani said she also wanted to open her own biokinetics fitness centre around Thohoyandou. “I am working my way up. I have given myself a period of five years to be working with a top league team, and by then my practice should be known all over the country as helping people with chronic diseases, injury rehabilitation, and fitness,” she states.

“I want to encourage young black girls to consider this career, because we have very few black women working as independent biokineticists. My goal is to make this career popular in rural areas and to mentor other young people who are interested in pursuing this career.”