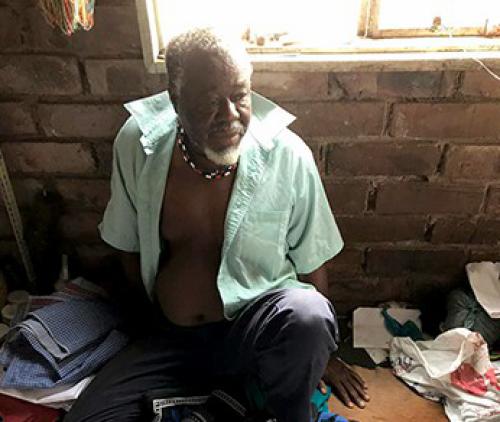 A traditional healer from Madimbo village, Mr Thomani Makhuvha, was arrested during the past festive season for the possession of unlawful firearms and ammunition. Photo supplied by SAPS Provincial Communication.

A 65-year-old traditional healer from Madimbo village outside Musina, who was arrested for the unlawful possession of firearms and ammunition on 21 December last year, appeared briefly in the Musina Magistrate’s Court on Tuesday, 29 December.

Mr Thomani Nelson Makhuvha was denied bail and will remain in custody. The case was postponed until 2 February for further police investigations.

According to Seabi, the members of Operationalised Information received a tip-off about the existence of illegal firearms in a house at Madimbo village in the Tshamutumbu policing area. On arrival at the said premises, the suspect allegedly evaded arrest and a shootout with the police followed. No one was injured and a case of attempted murder was opened at the Tshamutumbu Police Station.

“The team worked tirelessly, and the suspect was subsequently traced and arrested at his girlfriend’s house at the same village of Madimbo. Further investigations by the police led the team to a traditional healer in the Masisi policing area, where he had hidden the firearm that was allegedly used during the shootout with the police,” Seabi said.

A 9mm pistol with nine rounds of live ammunition was recovered, as well as a rifle and 21 live rounds of ammunition, at Madimbo village, which was hidden by the same suspect.

“The suspect is still to be profiled to link him with serious and violent cases and the recovered firearms will also be sent for ballistic tests to ascertain whether they were used in the commission of a crime. Police investigations are still continuing,” Seabi said.