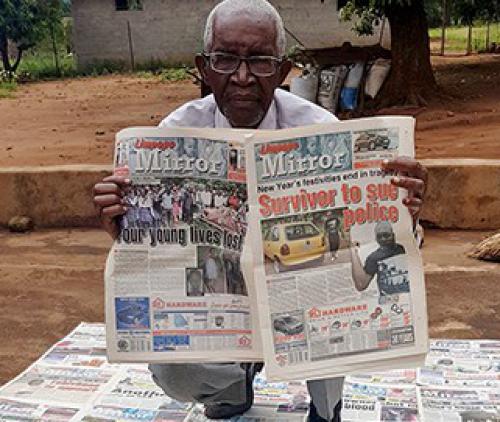 The Limpopo Mirror's number one reader, Mr Jutas Kanakana Mathoho, captured with some of the copies of his favourite newspaper, which he keeps after reading it.

Meet the number one Limpopo Mirror reader, Mr Jutas Kanakana Mathoho (82) of Tshiombo village, outside Thohoyandou. The old man has never missed a copy of his favourite newspaper for the past 30 years since it hit the streets in 1990.

Every Friday, Mathoho drives his old Toyota bakkie to Khubvi, about 15km away, to buy his favourite newspaper. Mathoho has a dedicated storage area in his house where he keeps the copies of the newspaper each week after reading it. He is prepared to lose a lot of things, but not the precious copies of his newspaper, which puts a smile on his face whenever he looks at it.

In an exclusive interview, the old man explained why he could never be separated from the Limpopo Mirror. “The Limpopo Mirror is my life. I cannot live without it. I fell in love with it from the first day it hit the streets. This is because it reports news that relates to me. The stories that are covered are local and about ordinary community members who are making a difference in our communities. It is very interesting when you read about something that happened in your vicinity, especially the places that you personally know. This newspaper is doing a very good job in developing the local communities, and that is why I love it.”

Mathoho acknowledges that his favourite newspaper has undergone many changes in the past 30 years. “I fell in love with the newspaper while it was still called the Venda Mirror back in 1990. There were times where you would find the whole newspaper printed in black and white. But now, the newspaper is very attractive because of the brilliant layout and full colour print of some pages. Since then, it has improved drastically. Many local newspapers come and go, but the Limpopo Mirror never disappears because it has stood the test of time.”

He remembers some of the reporters who wrote for the newspaper in years gone by. “I can’t forget the late Alpheus Siebane. He was a brilliant journalist who reported his stories chronologically. The likes of Samuel Matodzi, Victor Nevumbani, Nthambeleni Gabara and Godfrey Mandiwana were some of the very good reporters who did their work with dedication.”

He said he was deeply touched by the recent passing of the long-serving editor of the Limpopo Mirror, Mr Wikus Lee. “Although we never met in person, Mr Lee had been doing a great job to make sure that we received the high-grade newspaper every week. He has played his part and we will always remember him. We will always be comforted that he has laid a very strong foundation on which the newspaper is currently operating. May his soul rest in peace.”