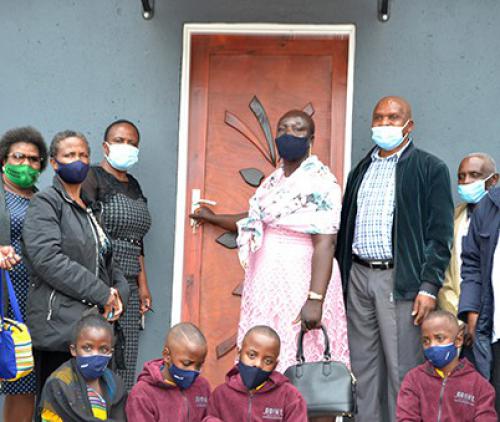 Azwitamisi Ambani (40) of Khubvi-Phalathonga unlocks the door of the brand-new four-room house, donated by the Adzimbei Foundation to her and her four children. On the left is Cllr Thina Mbedzi of the Vhembe District Municipality and on the right, next to Ambani, is Chief Thinawanga Randima, surrounded by councillors, with Ambani's quadruplets in the front.

When Ms Azwitamisi Ambani from Khubvi-Phalathonga outside of Thohoyandou gave birth to quadruplets, she was overcome with worry. She was unemployed and did not know how she was going to raise and accommodate four children. However, her worries lifted when the Adziambei Foundation donated a proper four-room house to her.

Ambani (40), who is now employed as a security guard attached to Univen’s Innovative Growth Company (UIGC), said that life had been hard enough even before she had given birth to her four children. She said she used to pray to God and ask Him why she had to suffer like that and pleaded for help to be able to raise the children.

Urangani, Uhone, Tambani and Ipfi, who are 10 years old now, had been taken care of by the late local businessman and philanthropist, Benji Netshisaulu, who donated groceries since their birth until now.

Ambani was one of two beneficiaries of brand-new houses built by the Adziambei Foundation. The other house was donated to the Mbulaheni family, of whom most of the family members were unemployed and lived in poverty.

Spokesperson for the Adziambei Foundation Mr Fhatuwani Netshishivhe said the foundation was a family foundation formed in 2016 to help with the advancement and education of poor learners and the development of disadvantaged communities. The foundation was started in remembrance of their late, kind-hearted mother and grandmother, who used to encourage her children to take education seriously, despite the fact that she was uneducated herself.

“We are a non-governmental organisation, focusing on the development of young people’s education. We offer educational assistance like bursaries to hardworking learners who come from poor families. We also offer motivation and career guidance to students, so that they can realize their dreams,” he said.

Netshishivhe said they wanted to break the cycle of poverty and underdevelopment in some of the rural communities, hence the newly built houses that were donated to the two families. “We plan to do more in the coming years.”

Cllr Thina Mbedzi from the Vhembe District Municipality said that they were witnessing the achievement by the Adziambei Foundation that would assist poor community members who did not have roofs over their heads.