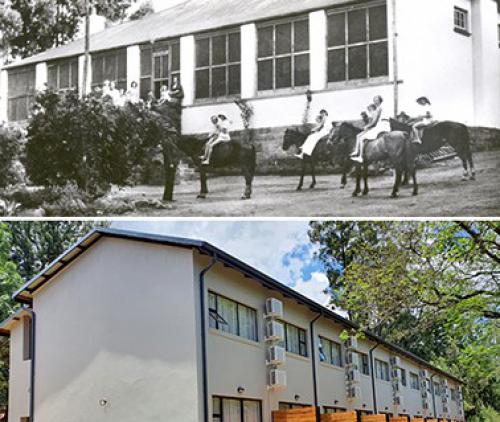 Above: An undated photo of the former Punch Bowl hotel. Below: The hotel now boasts 24 new luxurious accommodation units.

A “new” Avoca Vale, but with the old-style charm

On 1 November, a new chapter began in the illustrious history of what is now known as the Avoca Vale Country Hotel. The hotel has seen a significant revamp, boasting three-star facilities. Old meets new at this hotel, with 24 luxury rooms that have been added to the existing 24 old-style-charm rooms.

The beautiful gardens and pool area make this country hotel even more special - a definite choice for a hearty Sunday lunch. Part of the refurbishment included a modernised kitchen and a revised menu.

The hotel is a landmark on the road to the north and, throughout the years, many a weary traveller has found refuge in the cottages nestled in the folds of the Soutpansberg mountain. Up to a few decades ago, the hotel was called the Punch Bowl Hotel, but not because of the refreshing drinks that it may have offered. According to some of the older residents of the area, the name was derived from the shape of the nearby mountains, which resemble a bowl, such as that in which punch is served.

The history of the hotel is, unfortunately, not captured in detail. The facility is believed to have started out as a guest house, called the New Gate Guest Farm, possibly in the 1930s. Construction on the main road leading through the mountain started in about 1904 and in 1907 the first span of oxen pulling a wagon crossed what was later to be known as Wyliespoort. The original road to the north, however, did not pass the area where the hotel is situated. Perhaps the name New Gate is a reference to when the gate was moved to enter from the road, after it was completed a few decades later.

Who the first owners were, is not certain. Enquiries from previous owners and older residents only produced scattered pieces of the puzzle. In the 1950s, and possibly in the 1960s, the hotel was owned by a Mr Heim. He most probably sold it to a Mr Ben Pretorius, but few of the older residents can recall him.

Possibly one of the most famous owners of the hotel (at that stage called Punch Bowl), was a Springbok rugby player, Natie Rens. Rens was a very gifted flyhalf and represented the national side in two tests against Australia in 1953. Why he bought the hotel in the early 70s is unclear, but he seems to have been quite a celebrity and many residents visited the hotel just to meet him. He is still considered one of the “sexiest” rugby players who had ever worn the coveted green-and-gold jersey.

Rens only had the hotel for a few years, and it then became the responsibility of a Mr John Mather. (Rumour has it that he won the hotel in a bet, but this could not be confirmed.) Those years, a big advantage of owning a hotel was that it also gave you an off-sales licence. In John Mather’s time, the Punch Bowl Bottle Store in town was managed by Pam Laubscher. She later also managed the hotel and shares were sold to her son, Graham, and his wife Sue. In 1989, Sean Brennan managed the hotel.

In 1990, Elma and Mike Grant bought the hotel. They managed it for the next decade before selling it to Mark and Norma-Jean Sparrow in 2000. This also marked a name change for the hotel, as it became the Inn on Louis Trichardt. The hotel became part of a family of hotels that included names such as Inn on Zimbabwe.

A decade later, the hotel experienced a few “lean years”. It was sold to a new owner, but the deal never went through. In about 2011, the hotel was sold to Dr Matthew Flynn and his wife, Hilary. They started the slow process of renovating the ageing infrastructure, sorting out electrical and other problems. The buildings received much-needed attention and the “Grand Old Lady” received a bit more than just a new coat of paint. The Flynns renamed it the Avoca Vale Country Hotel, which tied in with their Irish roots. The Vale of Avoca is one of the most scenic spots in County Wicklow, in the east of Ireland. Ironically, the new name tied in well with a region where avocados are in abundance.

A feature of the hotel has always been its old-world charm and relaxed atmosphere. The building that houses the reception area, lounges and dining room used to be a farmhouse. The interior was furnished with pieces bought from the old Carlton Hotel in Johannesburg, which added to the old-world English charm.

In 2020, the world was turned on its head by a miniscule virus in a year of disruptions unlike the current generation has ever experienced. Avoca Vale did not escape the turmoil but was fortunately not affected in a negative way. The hotel was sold to Manupont at the end of last year, and the building of the new section of the hotel was done in the third quarter of 2020. Their idea was to retain the hotel’s classic character but modernise it and add more luxurious rooms.  While the accommodation industry was in lockdown, construction work could continue at Avoca Vale, where country living meets modern comfort.

The hotel is now fully operational. Bookings can be made for accommodation, conferences, weddings, year-end functions, and private functions. For enquiries, contact 015 151 0011 or email bookings@avocavalehotel.com.