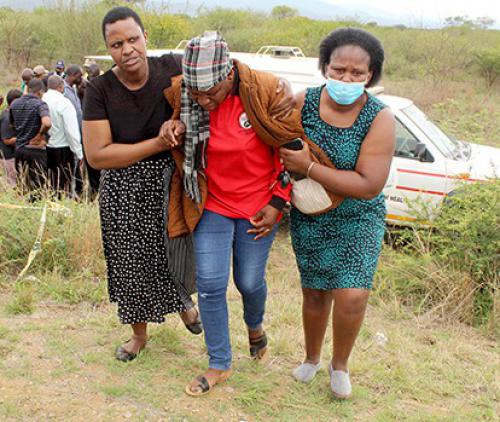 Family members support a bereaved Glenda Maduwa, wife of the late Simon Maduwa, at the scene of the accident where he died.

The D3715-road in the Sinthumule and Kutama area is always considered a hazard. Potholes and stray animals are ever present. Since October last year, 13 people were killed on the same stretch of road, which has claimed yet another victim.

Simon Maduwa (50), the latest fatality, was a kitchen worker at Air Force Base Makhado. The incident took place on Sunday morning, 29 November. Police spokesperson Brig Motlafela Mojapelo said that Maduwa had apparently lost control of his vehicle and it had overturned between Tshiozwi and Madombidzha.

Pastor Thomas Mammburu said that the family members were still in shock. “Only God knows why it happened like this. It is very painful to lose people like this.” He spoke on behalf of the family.

The untimely death of Maduwa did not only shock the family but friends and community members as well. “We have received many messages of condolences and it shows us that Simon was a people’s person who was accommodating to everyone, irrespective of colour, race or religion,” Pastor Mammburu said.

The chairperson of the Zoutpansberg Development Forum, Mr Patrick Sikhutshi, expressed his condolences to the families and said that their loved one would always be remembered. “Understandably, it is very difficult to continue with everyday life after such a traumatic experience and the family need support,” he said.

A memorial service will be held on Thursday, 3 December, at Maduwa’s home in Tshikhwani village from 10:00 until late. Various parties, including the Air Force Base, Jonathan Thifhulufhelwi High School and local community members, have allocated their time to pay their respects.

Maduwa’s funeral will be held on Saturday, 5 December. The service starts at 05:00 at Madombidzha Christ Family Centre and he will be buried at the Tshikhwani graveyard.